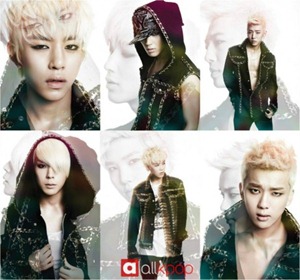 Last week, the group revealed their “hidden concept” teaser images with the faces of each member covered, leaving fans curious. The boys are returning with their blond hairstyles from their ‘Warrior‘ promotions, as well as black denim looks styled with gold chains. Each of the members had two images that overlapped for their new jacket photos.

Leader Bang Yong Guk stands out with two sides of his head shaved for a more masculine look, along with his top, which is slightly opened to reveal his flawless abs, stealing the hearts of fans once again.

Members Daehyun and Himchan, who are always competing for 1st place in looks among the members, once again show off their amazing features, with sharp noses and jawlines. Jongup shines in a glamorous hooded sleeveless shirt, showing off a new style of charisma, while Youngjae looks fierce with the tough look in his eyes and great looks. Zelo opted for a “baby-perm” hairstyle, going in between a tough guy and young boy style.