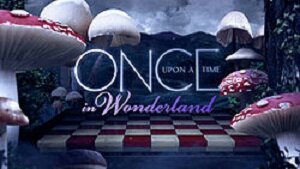 “Trust Me”: Unfortunately due to errands I missed the first twenty minutes of this show, so if anyone would care to let me know what happened there, that would be greatly appreciated.  But seeing as how I got to see the last forty minutes of the show.  I can offer my opinion on last night’s episode.

Personally, I think making a spin-off of once upon a time was a great idea because this story is just as rich as the other and to have it part of the other would just make it crazyand an overload of a show.  Now, this one, the story is fresh and the actors are amazing.  The CGI effects are okay for the most part, but those don’t matter.  Set design and story propel the show forward perfectly, and no offense to Once Upon a Time, but the writing here seems to be better, the dialogue fresher and the story unique.  Here you have Jafar and the Red Queen working together to thwart Alice as she looks for her one true love, Cyrus, a Djinni.  This really is a stand up show that is truly amazing, from acting to writing.  Don’t miss a beat.  Thursdays @ 8PM (EST) on ABC.

“Pilot”: Mary, Queen of Scots is by far one of my favorite queens in history.  For all record shows, she was the most honest, the most true to her people and one of the kindest.  So when the CW Network said that they were going to do a show about her life, I was thrilled.  And seeing the first episode did not disappoint.

The scene opens up with the year, which I missed, during the years when Mary was living with nuns, until one of her food tasters were poisoned.  Then she is shipped off to the French Royal Court where her life and crown are at stake as the Queen of France tries to save her sons life from a dark future predicted by Nostradamus, where he says Mary will bring about his death.  History shows us that King Francis dies, two years into his reign and marriage to Mary, so that’s a fact.

I’m just a sucker for historical fiction and to watch a show about one of my favorite queens in history, who had a very tragic end, is amazing.  The acting was amazing and the story hold a lot of romanticism and political intrigue because what is a royal court without betrayal and subterfuge.  Thursdays @ 9PM (EST) on CW.

“Poison Pen”:  So last night’s episode was an incredibly touching episode.  Last night we got to meet Sherlock Holmes first murderer.  A girl who poisoned her father due to the abuse he was inflicting on her, and the case was much the same as the one they were currently investigating.  It was really a profound episode, one that explored the issues of parental abuse, a topic that really does need to be addressed.  But it also shows just what they will do to fight that abuse and how capable of murder they are when pushed to their limits.  So all in all, it was a good episode, a very touching and amazing episode that was gripping.

This show has amazing writing and acting.  The humor is inescapable in this show, no matter how serious a topic may get.  The humor comes off as subtle most times, the more serious a topic gets or effects Sherlock Holmes the character.  I love this show.  Thursdays @ 10PM (EST) on CBS.