The Girl of Hawthorn and Glass should have been an easily loved novel. However, it left this reader feeling hollow and unsatisfied.

The first words I uttered after reading The Girl of Hawthorn and Glass were, “what the heck did I just read?” Once I said that aloud I knew this was not a winning novel.

I usually try to stay objective with these reviews, avoiding the use of pronouns such as “I” or “me.” I like being objective, saving my expressive nature for my Podcast and YouTube reviews. However, when a novel has such a negative impact on me, it makes objectivity difficult.

Like I said before, this novel left me feeling hollow. Every time I put this novel down, I just stared at it, trying to find something to grab onto. Once I reached the end, feeling empty, I realized that there was nothing worth absorbing in this novel.

The characters jump scenery in a snap, and there is the briefest of detail to garner some attention to the reader, but it does not paint a scene. There is a desert, a labyrinth, a forest, and an island, and yet, there is nothing there to give life to the imagination. There is nothing to hold the reader and ground them to the story.

Then there are the characters. Eli had much potential to be compelling, but much like the story, she lacked substance. Her lacking substance is interesting because she is something made, made by witches, her will is not her own, but as a thing, she can be many things. Tav and Cam as well. They lack description as well. At one point, Eli remarks on Cam’s mustache catching me off guard. Immediately I thought, “he has a mustache? Since when?”

Adan does not focus on giving these characters a solid form. They are more like blurry figures, lingering against the backdrop. They also lack chemistry. The dynamics are almost non-existent. The reader sees that they are friends, but the lack of substance does not allow it to be believable.

While the novel lacks substance, it also lacks in pacing. The scenes change in a flash, and the event that sends Eli to the human and witch renegades, it does not fit. There are two pivotal moments that almost seem forgotten by the author, inconsequential. But they aren’t. The fact that the catalysts for the plot are mentioned sparingly in detail is a distraction. These are critical moments for Eli and yet they are just brushed off like dust.

The novel feels very disjointed as it moves along. The pacing, in the beginning, moves too quickly and then snatching off. It sporadically picks up pace. However, without any detail, it loses the reader in the irregular pacing.

The Girl of Hawthorn and Glass should have easily been a novel for me to enjoy, but it was not. Ultimately, with a lack of substance and poor pacing, this novel left me feeling hollow and unsatisfied.

The Girl of Hawthorn and Glass 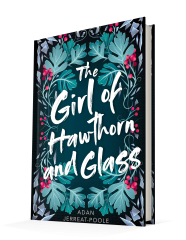