A Sleeping Beauty retelling, Malice takes readers to a new realm and reinvents the fairy tale with a compelling narrative and beautiful LGBTQ romance.

Malice stands apart from typical retellings, foremost with the world-building. Walter gives the story an engaging foundation, establishing three different races. There is the Fae, the humans, and the Vila, which is what Alyce is.

Alyce is called the Dark Grace, half-human and half-Vila, the dark counterpart of Fae. After the war that eradicated the Vila, the Fae gifted their human allies with magic, giving human girls what they call their Grace, turning their blood gold, and allowing them to provide the kingdom with magic and enhancements.

Nevertheless, of course, Alyce is taunted and ignored by her kingdom for being half Vila. They have no problem using her magic in private, but in public, the kingdom shuns her.

Walter does a great job of drawing illusions between the original fairy tale. However, Walter gives her story more history to built up the characterization, depth, and tension. Learning more and more about the Vila gives the story more dimension, luring in the reader.

Honestly, I loved the characterization above everything else. Malice is a character-driven story that follows Alyce and her relationship with Princess Aurora.

Walter does an incredible job of first establishing the friendship between these two incredibly. Aurora does not see Alyce as a monster, simply as another Grace used by her kingdom. Instead, Aurora seeks to break the curse without true love’s kiss so that she can lead her kingdom into a brighter future.

By building up the friendship between the characters, Walter is building up the characterization of these characters. Aurora is not a damsel in distress. She is an intelligent and formidable princess, rebellious while also being considerate. As for Alyce, she is not the monster everyone wants her to be. Alyce is just a woman who wants to be treated fairly and respected instead of scorned for her green blood.

There is an incredible amount of depth to these characters, even the minor ones, that make them relatable and complex. Furthermore, to see the relationship blossom between Alyce and Aurora is fantastic. It is true love and makes the reader eager to see them fight for their true love, rights, and kingdom.

Malice is incredible. Everything Walter has done with this novel, from the world-building and history, to the complexities and depth of the characters, will make this novel stand apart. 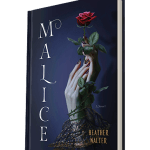