Laurie Forest weaves together a tale of fantastic fantasy in The Black Witch, one that sweeps the story off its feet while dealing with important themes such as racism, bigotry, and xenophobia.

What Forest did very well here was structuring her world. Of course, there is much world-building going on around here, but more than that, she gives depth by focusing on the politics in the world, intricacies of the different clans, their religious beliefs, and mythologies.

This is a world full of Witches, Kelts, Elves, Lupines, and Icarals. There is so much magic in this world, so much lore that it adds depth to the story. Forest devoted much time to making her world cohesive. She gives the story dimension by focusing on these separate groups of people, what separates them, defines them, and brings them together. There is much culture here, and it leads to bigotry, xenophobia, and racism.

Elloren sees all this. As the descendant of the famous Black Witch – the most powerful witch to ever exist – she has had many privileges in her life. So she is unaware of the privileges she has in life. Until she comes face to face with the injustices and prejudices, other races face while at school.

I love how Forest deals with racism and prejudices; how she uses that to evolve Elloren to fight against them connects to the reader.

It is refreshing to see a privileged character educate herself on the struggles others face. It makes the reader think of their privileges and the injustices brought on by prejudices based on gender, sexual orientation, race, and religious beliefs.

The Black Witch, among its deep and thoughtful storytelling, also has incredible characters.

There were times in the beginning when Elloren fell a little flat as a character. Early on, some of her best moments are when she subtly stands up to Fallon Band, the token mean girl. However, she is more than that as the story develops. Moreover, that is what makes Forest a strong writer.

Forest knows how to flush out and grow out her characters in a way that keeps the story moving forward. At times, they risk becoming tropy, but Forest adds depth in her dialogue, the characters’ narrative, and growth.

The character growth is impressive. It is slow and steady and extends beyond the main character. Everyone Elloren connects with grows alongside her, making for a captivating read.

The Black Witch is fantastic. As a start to a new series, it has incredible world-building that continues throughout the novel. The focus Forest has on developing complex and relevant politics and creating various mythologies and prejudices highlights how talented she is.

I am excited to see how this series plays out. 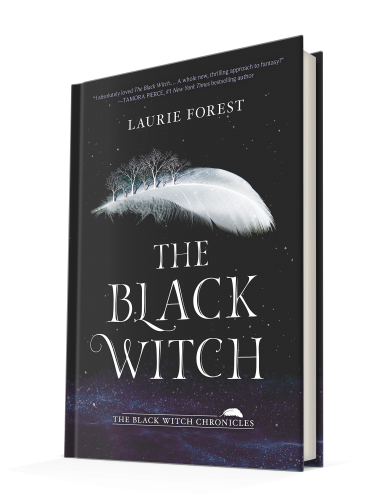