Hey there avid readers. I hope that everyone has had a wonderful week. Seems I’m starting to get backlogged again with my reviews and reading list. I’ve gotten some requests to read some novels from many authors. So at the moment if you are wondering if I would like to read your book the answer is, of course, yes, however, please understand that I’m backlogged so think long and hard about whether or not you are prepared to wait. There are some instances where I’m able to push a book up on my reading list, however, they are few and far between and take a lot of consideration. I read them in the order that I get them. Books set to expire to get precedence, so if you send me a file like Penguin’s First to Read program, please let me know about any expiration date. And also stay tuned for my reading list! This reading list is to let you know which reviews to expect in the future so be watchful about when you’re going to see your book. Be warned though, I only tend to put 2 – 3 reviews up a week so give myself time to read and work on my own novel. Also my job, need that too.

But in the meantime, check out these titles and see if they tickle your fancy. Happy reading!

In this charming mystery from the bestselling author of Paws and Effect, two magical cats have powers of detection that prove indispensable to librarian Kathleen Paulson…

With a well-placed paw on a keyboard or a pointed stare, Kathleen’s two cats, Hercules and Owen, have helped her to solve cases in the past—so she has learned to trust their instincts. But she will need to rely on them more than ever when a twenty-year-old scandal leads to murder…

The arrival of the Janes brothers has the little town of Mayville Heights buzzing. Everyone of a certain age remembers when Victor had an affair with Leo’s wife, who then died in a car accident.

Now it seems the brothers are trying to reconcile, until Kathleen finds Leo dead. The police set their sights on Leo’s son and Kathleen’s good friend Simon, who doesn’t have much of an alibi. To prove her friend innocent, Kathleen will have to dig deep into the town’s history—and into her sardine cracker supply, because Owen and Hercules don’t work for free… 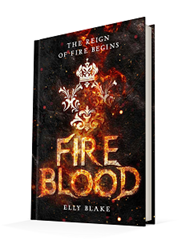 All hail the Fire Queen.

Against all odds, Ruby has defeated the villainous Frost King and melted his throne of ice. But the bloodthirsty Minax that was trapped inside is now haunting her kingdom and everyone she loves. The answers to its demise may lie to the south in Sudesia, the land of the Firebloods, and a country that holds the secrets to Ruby’s powers and past…

Despite warnings from her beloved Arcus, Ruby accompanies a roguish Fireblood named Kai to Sudesia, where she must master her control of fire in a series of trials to gain the trust of the suspicious Fire Queen. Only then can she hope to access the knowledge that could defeat the rampaging Minax—which grows closer every moment. But as sparks fly in her moments alone with Kai, Ruby no longer knows whom to trust. The fates of two kingdoms are now in her hands.

History records that the great voordalak – known across Europe as Dracula – perished in 1893 beneath the ramparts of his own castle, deep in the mountains of Wallachia. In Russia, the Romanov tsars are free of the curse that has plagued their blood for two centuries.

But two decades later and Tsar Nicholas II faces a new threat – a threat from his own people. War has brought Russia to her knees and the people are hungry for change. Revolution is in the air.

Mihail Konstantinovich Danilov – who himself carries Romanov blood – welcomes the prospect of a new regime. Like his ancestors he once fought to save the Romanovs from the threat that Zmyeevich brought them. Fought and won. But now he sees no future for a Russia ruled by a tyrant. He is joined in the struggle by his uncle, Dmitry Alekseevich – a creature born in a different era, over a century before. For more than half his existence he has been a vampire, and yet he still harbours one very human desire; that his country should be free.

But the curse that infects the blood of the Romanovs cannot be so easily forgotten and Mihail soon discovers that it – that he – may become the means by which a terror once thought eradicated might be resurrected . . .