Witches Steeped in Gold is a Jamaican-inspired fantasy that impresses the reader with compelling characterization and narrative.

Witches Steeped in Gold offers readers a unique fantasy. Smart delves into the roots of her culture to build up the magic that lies there and give depth to her narrative.

It was beautiful to see the illusion that different orders mirror the different groups of people in Jamaican. However, the strain between the Obeah and the Alumbrar witches mirrors the two-party system and the existing constitutional monarchy. So it was interesting to see the politics come alive in the narrative. The reader sees the dislike between the different orders, the prejudices that live there because they may have some of the same beliefs, but their practices are different.

However, it does not stop there. There is also the language, the tone, and the sound of the characters that drop the reader into the Jamaican setting. The reader can hear their accents in their word choice, and the way Smart uses slang and translates it to the reader keeps the reader engaged. Smart translates the language via context without creating a wall between the reader and the text.

Probably the best aspect of Witches Steeped in Gold was the characterization. Jazmyne and Ira (Just-Ira or Iraya Adair) go on a journey that changes them by the novel’s end.

Ira is the lost empress; her parents were killed in the coup led by Doyenne Cariot, Jazmyne’s mother. After all these years, she has one thing on her mind: revenge. Ira has no desire to be queen. All she wants is revenge on the snake who killed her parents and conscripted her order of witches.

Jazmyne wants to remove her mother from the throne and replace her, believing her mother is power-hungry and evil, making her a poor leader. However, for her, she wants to fix the errors of her mothers and become a fairer leader.

It was so interesting to see Jazmyne slowly turn into her mother. As the saying goes, “to kill a monster, you must become one,” and she slowly does. At first, the reader does not see it until the end, but that makes her journey so compelling. Her changes are subtle, they catch the reader off guard, and it is a jaw-dropping moment when it happens.

Ira went from being this semi-selfish and a closed-off individual who wants no friends, only revenge with Ira. However, soon, her eyes opened. Ira sees that this is bigger than her revenge. Her people need help; they need a leader who can help usher in a new age of peace and equality. So Ira slowly becomes a better person, a more thoughtful person in her journey to get revenge.

With excellent character development and an engaging plot, the Witches Steeped in Gold offers readers a start to a unique and compelling fantasy. 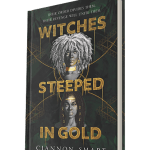