Go The Distance is the eleventh installment in the Twisted Tale series by Disney-Hyperion asks: what if Meg had to become a god?

Hercules is one of my favorite Disney movies. It gets Greek mythology wrong, but the heart, the characters, and the humor within the film make it stand out. Not to mention that musical score.

Honestly, I could not pick up this novel without humming “Go the Distance” (I am listening to it now). Moreover, what impressed me most with this novel was that Calonita managed to recapture the magic of the film while also incorporating elements of the film and actual Greek mythology into the storytelling.

Go The Distance is a heartwarming tale that follows Meg on her journey to prove that she can be a god. However, there is more to it than that. Meg’s journey is deeper than that. With a past filled with heartbreak, Hera and Athena challenge Megara to find the strength within herself, to find the self-worth and love that make her compassionate and strong.

Showing flashbacks of Meg’s life before she met Hercules before she met Hades, the story highlights the pain in her past. By delving into her past, Calonita gives more depth and attitude to the famous girl who won Herc’s heart. Using classic lines from the film, Calonita gives them more profound value to the reader and Meg. As she goes on this heart-wrenching journey to prove to herself, she is worthy of love to proves to readers that it is okay to open yourself up and be vulnerable.

Of course, Calonita also introduces the plot of Persephone and Hades, fitting it into the mold of the story in a compelling way.

That is what is fresh of Calonita’s writing, the depth of her writing, and how she can effortlessly weave two seemingly different stories.

The story of Hades and Persephone is famous in Greek mythology. In a few pages, Calonita makes the readers believe in the relationship between Persephone and Hades. Moreover, Persephone is not some dainty girl. Instead, the reader sees the spunk and attitude of her characterization, making her the perfect match for Hades.

Their romance is not seen much as the story is not about them, but Calonita makes the readers believe it with few words.

Furthermore, their romance adds to the story instead of feeling thrown in there, which marks a talented writer.

Go The Distance is an incredible twisted tale. With solid storytelling that recaptures the film’s heart, giving Meg her time to shine and grow offers readers an intense story of coming to terms with grief and heartbreak and allowing oneself to be vulnerable. 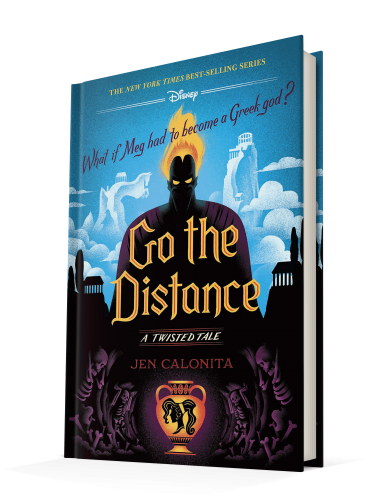