The second novel in the Rosetta Academy series, Of Princes and Promises, follows Caterina and Rahul in a contemporary and modern retelling of The Frog Prince.

Of Princes and Promises is, more or less, out of what I would typically pick up for myself. However, I like to step out of my comfort zone now and again to expand my horizons. Some things I like, some things I do not.

However, I did find myself enjoying Of Princes and Promises. What worked well for the story was the modern and contemporary feel of the story. The novel follows Caterina, the queen bee who has just gotten out of a very public breakup with her cheating boyfriend. However, now winter break is over, and she finds herself without a date for the first social event of the season, whereas her ex has a date with a supermodel. Now Rahul, who was a friend to Cat when she needed it most, loves her. He is genuine and honest, things Caterina appreciates, which is why she asks him to be her date to the Gala, on the condition that she give him a makeover.

Of course, he agrees, but nothing goes according to plan. Even with his eidetic memory, he is socially awkward until they get this jar of “magical” hair gel. Once he puts that on, he becomes RC, unrecognizable with his charm and suave.

Menon works hard to maintain the fluidity of the story, keeping the story engaging with the pacing and the development of those dynamics. Moreover, while there is that little bit of fantasy to the story, it does not take away from the realism that grounds the reader in the story. Instead, it makes the romance more believable for the story instead of something fantastical, which I appreciate.

I do not read many romance books because I feel the romance tends to lean more on the unrealistic side, but Menon ensures that there is something believable between the characters that makes the reader connect.

Overall, I thought the character dynamics were well done. They were believable and focused on the growth of the characters.

Rahul is the more relatable of the two characters. Socially awkward, Rahul never quite knows how to read the room. His family replaces him in family photos with his cousin. So, Rahul has many insecurities about who he is, and when he becomes RC, the more he does, the more he begins to hate being Rahul.

It highlights something for Caterina and builds upon their dynamics. Finally, Caterina realizes that she is acting just like his family, that he should love himself for being himself, for everything that makes him unique, genuine, and kind.

My only issue with the story and the characterization is that Caterina is too self-aware. Somehow, Caterina always knows the right thing to say and always says the perfect thing that makes her a little unbelievable because I am sure I was not that self-aware as a teenager.

It was delightful to see her recognize her toxic behavior and address it, growing out of it, and apologize for it. This growth did make the dynamics more thoughtful and enriching; it was just those moments where she seemed too perfect to be real that took me out of the story.

Of Princes and Promises is a unique take on The Frog Prince. In a modern setting with a contemporary atmosphere, the novel focuses on character growth and toxicity and connects to the readers emotionally.

Of Princes and Promises 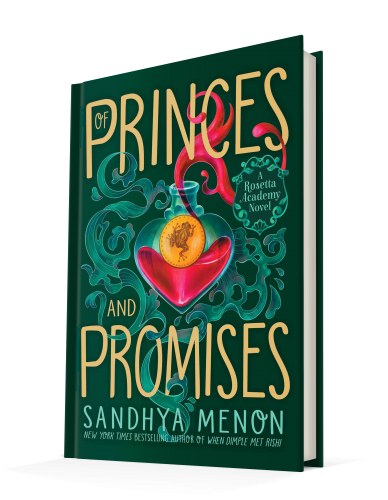