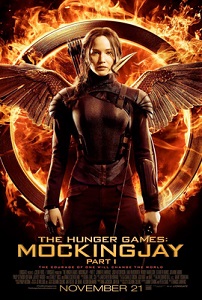 Katniss Everdeen finds herself in District 13 after she literally shatters the games forever. Under the leadership of President Coin and the advice of her trusted friends, Katniss spreads her wings as she fights to save Peeta and a nation moved by her courage.

Mockinjay Part 1 is the third film in The Hunger Games series that follows one Katniss Everdeen as she discovers the truth about District 13 and the rebellion forces.  With Peeta held captive by the Capital, his loyalties and Katniss’ are put to the test as they brainwash him and Katniss fights for him.

Over all, as the movie, this is the film that is more far removed from the book than the previous films that were carbon copies of the novel. As an adaptation it wasn’t as good as the previous films in the series, as an action film as well, it failed in comparison.  Now, that is not to say that it was a bad movie, it was just slower than the other novels.  It was obvious that the screenplay writers worked very hard to extend the plot line of the novel with the changes that they made.  Some of those scenes were heartbreakingly beautiful as they showed the revolution take place and the people fight back.

As far as the acting goes, it was very well done, but Julianne Moore’s characterization was a little off.  Julianne Moore is a great actress but Alma Coin is supposed to be a character that everyone loves to hate and also a character who viewers are supposed to understand really hates Katniss.  Unfortunately neither the writers, the director or Julianne Moore understood that aspect of the novel.

Other than that, it was a well-made movie with a lot of heart and emotion to it that leaves the audience captivated.

Based on Mockinjay by Suzanne Collins