Hey there avid readers! I hope everyone is having a wonderful time this week. As always I’m working on catching up on my reading. So on that note check out my latest reading list. Let me know what you think of these titles and let me know what’s on your reading list. Happy reading! 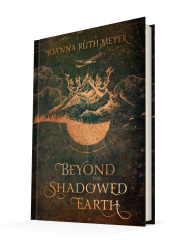 1. Beyond the Shadowed Earth (Beneath the Haunting Sea #2)

It has always been Eda’s dream to become empress, no matter the cost. Haunted by her ambition and selfishness, she’s convinced that the only way to achieve her goal is to barter with the gods. But all requests come with a price and Eda bargains away the soul of her best friend in exchange for the crown.

Years later, her hold on the empire begins to crumble and her best friend unexpectedly grows sick and dies. Gnawed by guilt and betrayal, Eda embarks on a harrowing journey to confront the very god who gave her the kingdom in the first place. However, she soon discovers that he’s trapped at the center of an otherworldly labyrinth and that her bargain with him is more complex than she ever could have imagined.

Set in the same universe as Joanna’s debut, Beneath the Haunting Sea, Beyond the Shadowed Earth combines her incredible world building and lush prose with a new, villainous lead.

No one can save her.

In order to protect Prince Lucien d’Malvane’s heart, Zera had to betray him. Now, he hates the sight of her. Trapped in Cavanos as a prisoner of the king, she awaits the inevitable moment her witch severs their magical connection and finally ends her life.

But fate isn’t ready to give her up just yet.

With freedom coming from the most unlikely of sources, Zera is given a second chance at life as a Heartless. But it comes with a terrible price. As the king mobilizes his army to march against the witches, Zera must tame an elusive and deadly valkerax trapped in the tunnels underneath the city if she wants to regain her humanity.

Winning over a bloodthirsty valkerax? Hard. Winning back her friends before war breaks out? A little harder.

But a Heartless winning back Prince Lucien’s heart?

The hardest thing she’s ever done.

A princess longing to be free…

On the dawn of her courtship trials, Princess Lyana Aethionus knows she should be focused on winning her perfect mate, yet her thoughts wander to the open sky waiting at the edge of her floating kingdom. One final adventure calls. Upon fleeing the palace, the last thing she expects to find is a raven prince locked in a death match with a dragon.

A bastard aching to belong…

Reviled son of a dead king, Rafe would do anything for his beloved half-brother, Prince Lysander Taetanus, including posing as him in the upcoming courtship trials. When a dragon interrupts their secret exchange, he orders his studious sibling to run. After suffering a fatal blow, Rafe is saved by a beautiful dove who possesses forbidden magic, just like him.

Fate brought them together, now destiny will tear them apart…

Unknown to the world above, on the foggy sea ten thousand feet below, a young king fights a forgotten war. He believes Lyana is the queen prophesied to save the world, and with the help of his favored spy, hidden deep in the highest ranks of the dove royal house, he will stop at nothing to have her.