The Beholder by Anna Bright follows Selah as she is somewhat exiled by her wicked stepmother to find a husband, taking her away from her home and her ailing father.

While gifted with a promising premise, The Beholder‘s issues stem from the character dynamics. However, the saving grace of the novel lies in the world-building and mythology.

With The Beholder, what works best is the world-building. The reader gets to see the kingdom of Potomac through the eyes of the Selah and understand this world. It is similar to reality and takes on an alternate version of the world. This story very much lives in the realm of mythology.

On her journey, Selah meets Homer who tells her of his friend Odysseus and his wife Penelope, how she had to use her cleverness to escape a dire fate. It is so exciting to see this new world interpreted with many timelines intermingling. King Constantine is here in England and they are not a world power, but rather the Imperia which rules with an iron fist. And then there is the Kingdom of New York which is an interesting addition to the story. This addition creates such an intriguing element, bringing in something familiar to readers and turning it into something new.

All these elements create such a powerful image for the reader, giving the world-building a solid foundation.

Alongside Bright’s incorporation of Greek Mythology, there are also elements of Norse Mythology, as Bright brings Selah to Norway. There is so much world-building here alongside a mixture of cultures and mythology that allow this novel to be more than another Snow White retelling.

What Did Not Work

The dynamics and characterization were lacking. Selah is not a bad character, but her voice seems very static. There are times when she comes off as a spoiled princess. It is easy to understand her frustrations; she feels unloved and berated by her stepmother and is sent away from her ailing father in the face of humiliation. Selah is to be the next leader of her people and has a strong voice. However, she often comes off as meek rather than utilizing her strength and determination. Selah seeks the courage of Penelope in hopes that it will save her and return her to her father.

Bright does show growth for her character; that’s true, but unfortunately, Bright works against herself with the character dynamics.

There is too much romance in this novel. There are many hints that Selah is attracted to her ship’s captain, highlighted by many little moments of them briefly touching hands or shared looks. Bright has the reader thinking she will end up with him. The in England Selah falls in love with Bear. And then again, a week later, she falls in love with Prince Torden of Norway.

In short, it is unbelievable. A love triangle would have been better than this because Bright is taking away the magic of the romance by having her fall in love with every prince she meets. It works against the story and Selah. By doing this, it either shows Selah as fickle or so desperate for love, neither of which is an appealing color on her.

The Beholder is okay. While the world-building and interlinking of mythology make this a captivating read, the romances in the novel just make it unbelievable. 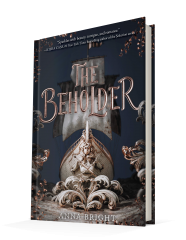