What a fantastic story. Wicked Fox is such a terrific fantasy, delving into Korean folklore. Following Miyoung, the story goes through the motions of what it is like to be gumiho, a nine-tailed fox who must devour the energy of men to survive.

It is such a well-developed story. Miyoung struggles throughout the story with her identity, with being this mystical being that survives off the lives of others. To assuage her guilt, Miyoung only takes the life force of men guilty of heinous crimes. Nevertheless, that still does not erase her guilt.

Being judge, jury, and executioner weight heavily on her conscious, making her such a compelling character. Miyoung is so different; she is alone not because she wants to be alone, but because she believes it is better that way. It is not until she meets Jihoon and his friends that she starts to open up.

Miyoung and Jihoon’s relationship is rich and complex. They both play off each other and balance each other out wonderfully. There dynamic is more than just about a girl and boy finding peace with one another; it is about them facing their pasts together, finding the strength to grow and let go of the pain that haunts them.

Miyoung is a stoic female character, while Jihoon is the more charismatic goofball. It is a switch on the gender norms that plague young adult fiction by allowing the female character to be this strong unyielding force to be reckoned with.

Moreover, to see Jihoon be her equal and opposite was incredibly compelling as well. He has so much pain locked away, hidden behind jokes and false smiles, that the layers that hide that pain reveal so much about his personality.

Together, Miyoung and Jihoon make a compelling team.

As for the story, the pacing is fantastic. It unveils the story at an incredible pace, highlighting time with scene changes and mentions of the seasons. The detail is exquisite and whenever there are time jumps, the reader does not get lost. Cho also captures the passage of time with the phases of the moon. It is those small details that provide the story with its vivid detailing. Cho has the story in her hand and tells it, layering it with time and plot twists that keep the reader on edge.

Every so often, Cho inserts these short stories into the narrative. These stories are pieces of Korean folklore regarding the gumiho. They are so fascinating and present a rich and deep understanding of the gumiho, on the presentation of beautiful and strong women and the danger they pose to men.

These stories give Miyoung and her mother history, a place to come from as well.

Wicked Fox is such a fantastic story. By delving into Korean folklore, Cho gives readers a novel filled with compelling characters and an intriguing plot. 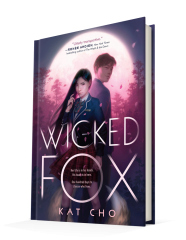