On Wings and Ash was not a bad story, but it was not memorable either.

The novel is more of a novella firstly. At only 134 pages, the novel takes place in a single day. This is not the problem with the novel. Some of the greatest stories are short stories and novellas. However, what works against the novel is the pacing. It drags out too much, stretching thin this story that already has a thin foundation.

The references to Greek mythology and ancient Greek culture was interesting, but the Pyx diminishes it, beings that can exist with the minds of an animal.

Right from the beginning, the Pyx challenge the idea of Greek mythology as this small village prepares for the festival of Hades. They do not understand it. So already, some of the magic and charm of the novel is taken away.

As for what the Pyx are, it is somewhat unclear. As you read it, they come off like disembodied voices. It would have been better if they had given more history and that probably would have prevented the novel from dragging so much because then there would have been this clear idea of the Pyx and their origins.

It just felt like there was more Holloway could have done with this story because there is this prophecy in the beginning, but it is unclear what the prophecy is exactly and then the reader is waiting for the story to address it.

There is also a lot of character POV switching. I usually do not mind this except for the fact that some of the points of view seem unnecessary. Take Charon for example, his point of view did not add much to the story; it was just there to highlight his love for Alessa. It was unnecessary because the reader already has this sense of romance between the two from Alessa’s perspective and that is enough.

The ending as well, does not offer much closure. It is open-ended and fails to resolve some of the issues within the story.

All in all, On Wings and Ash was not a bad story, it is a short, sweet read, but there is so much more the author could have done in this amount of time. Alessa does not come off as that unique; she is very ordinary which, on the one hand, does make her relatable. She steps away from the social norms and is headstrong, but other than that, there is nothing remarkable about her.

On Wings and Ash 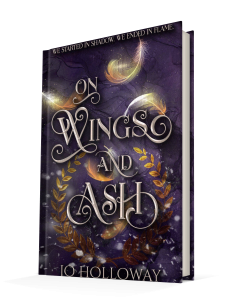