Ignite the Sun by Hanna Howard is imaginative and thoughtful. It brings to life the dichotomy between light and darkness in a literal way to tell the story of perseverance and hope. As a debut novel, it is good, but it is not without its faults.

Howard did an excellent job with her world-building, using her imagination thoughtfully. There is a range of beings in the novel that give the story an edge, while also remaining unique. There are wood nymphs who are elves, water nymphs who can turn into mermaids, banshees, and most interesting are the fire nymphs.

This allusion to her numerous freckles calling them spots makes her seem like a cheetah, giving her a unique edge. It is something unique, making it enjoyable.

These beings create such a strong connection to the history of the world and the earth in this novel, making it quite enjoyable.

However, what was more interesting were the witches and the mages and how different they were. Mages have their magic inside them and channel them through a relic while witches have to steal their power. It was an exciting sinister edge that further highlighting this dichotomy between and good and evil.

Howard focused on building the world with imagination. There are many details to ground the reader in the story, and it has a vibrancy. It is such an easy novel to visualize, and the way Howard trickles in bits of history here and there gives the story a strong foundation while also keeping the tension and pacing steady.

As exciting as the story is, again, it is not without its flaws. As a debut novel, it is good, but Howard relies too much on tropes and clichés to give her story its footing. Siria falls into those tropes quickly. She is the “chosen one,” and many of those “chosen one” tropes create many clichés in the story, unfortunately.

While she does go on this incredible journey and grows as a character, it is difficult to be invested in her because she comes off as a spoiled princess. Yes, her world has been turned upside down and everything she knows is a lie and an evil witch is trying to kill her, but her tone is off-putting and makes it hard to connect to her.

That said, she does grow as a character, and the dynamics grow with her. These are some noteworthy characters and they all have strong personalities that blend in well together. The way they push each other forces them all to be better.

Ultimately Ignite the Sun is an exciting story. It has such a fabulous imagination behind it, highlights the magic in the world, and how it can be warped while also showing readers this battle between light and darkness. While clichés do give the story its foundation, it does not detract from the overall enjoyment of the novel. 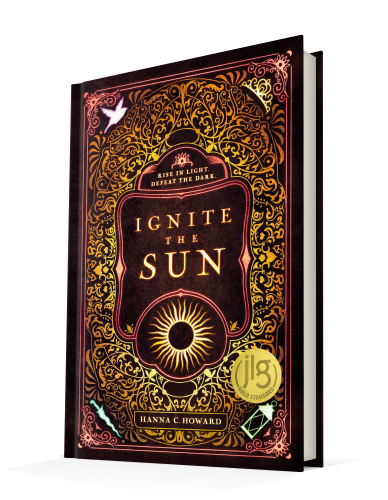