Soulswift is a remarkable novel, bringing to life a fantastic story that asks the big questions without alienating any reader.

The most powerful aspect of this novel is how it addresses religion and belief. Because that is what Soulswift is about, it is about religion, a sensitive and personal subject. There is that risk of alienating the reader but the structure of the religion and the ideals are incredibly relatable to every religion. That is what makes Soulswift so captivating, how it can bring together readers despite their religious beliefs.

Geyla is a Daughter of Ovin, a Vessel for the One True God, a religion which teaches her to hide her womanness, to keep her head shaven and her breasts bound. Her religion taught her that Mother Elath was a demon that needed to be trapped.

Tavik (rhymes with havoc) is an Elathian, a group of people who believe in both the Father and the Mother as equal deities and seek to release the Mother from her prison. These two characters believe two completely different things, and yet they bond over their discussion of differences. They are also respectful of one another.

There is so much discussion throughout the novel between the characters that envelopes the reader into this compassionate and thought-provoking message about religion and how it should unite us instead of dividing us.

The discussion between the characters once again could alienate the readers if not for the strong characterization. Geyla’s internal narration is compelling because of how relatable it is. She questions her beliefs constantly, questions her feelings, and that is something relatable to many people. However, what it comes down to is not the religion but her identity, or lack thereof. Geyla has always felt like a Vessel as if she had no control over herself. She never loses her faith but what she regains is her identity. Geyla regains her sense of belonging, and this adventure she embarks on challenges her; it opens her eyes, enlightens her, and encourages her to find herself.

However, it is not all serious. There are times when her internal narration is quite hilarious. Once again, she is relatable, with all the complexities of any human.

Furthermore, of course, there is Tavik. He balances out Geyla’s seriousness with such a sense of honor and humor. Once again, he is also a character who never loses his faith, but he never loses his humor.

These two characters balance each other perfectly, growing together as they learn more and more about the history of their beliefs. The dynamics that develop between Tavik and Geyla are lovely. Bannen gives readers this wonderful and beautiful friendship making the story fun and enjoyable.

Soulswift is a powerful novel that will break the reader’s heart with its bittersweet ending and leave the reader with this uplifting feeling of hope. It is a Book Club novel worthy novel that can relate to all readers and open powerful discussions. 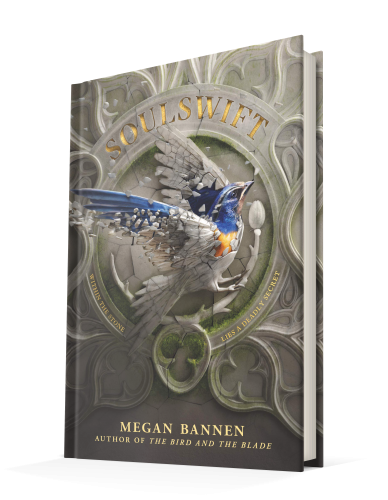