The Wide Starlight is a fantasy filled with realism to ground the reader and Norwegian fairy tales.

What makes this story so interesting is the way it unfolds. Eli, who lives with her father in Cape Cod, when strange things begin to happen. When she was a child living in Svalbard, Norway, her mother dragged her into the night with the Northern Lights above her then vanished with the lights.

And then she reappeared ten years later in Cape Cop, but she did not come alone.

The way the tension rises in the story lures the reader in and the way that Lesperance tells the story. When Eli is reminiscing, she begins with “once upon a time,” creating this wonderful fairy tale atmosphere for the storytelling. That is key for this story, setting up that atmosphere for the reader and establishing this eeriness.

Lesperance brings Norwegian fairy tales to life in this story, fairy tales that are not always perfect. Moreover, this story captures that in the way Eli remembers the fairy tales and remembers her mother. It is thoughtful and engaging because it makes the reader wonder about her mother, was she magical or just mentally unwell? The answer is a little of both, something the reader sees. She is unwell, but it is because of the cost of magic. For Eli’s mother, it is a bit of a drug, one she wants to quit because it is so dangerous but one she cannot quite let go of, and it connects with the reader every time, this power words have over people and the magic that comes from reading.

The Wide Starlight is such a great book, but it does suffer from one hindrance: Eli herself.

Eli’s problem is an understandable one, but it does not make the reader like her much. She is not a poorly written character; just some things did not fit with who she is.

The disappearance of her mother has left a hole inside her. When her mother vanished, she lost more than a parent; she also lost this connection to her culture, the language, the myths, and fairy tales. So it says much about her characterization and makes the reader understand her actions.

That said, the reader cannot ignore how selfish she is as an individual. She gives her best friend a hard time for being accepted into this college prep school that will challenge her, encourage her to look for an at-home solution, and her father? This is a man who loves her dearly, and she vanishes without a word. Eli has forgotten that her father lost a wife, this woman he loved more than anything, and she does not seem to care that she almost dies, which would leave him completely alone and heartbroken.

These are just a few examples of her behavior that make her unlikeable. Again, reading the reader understands her actions and behavior, but that does not excuse it or make her likable.

The Wide Starlight is an exciting novel that is perfect for fans of The Hazel Wood. The storytelling approach and re-remembering give the story the depth it needs to bring the fairy tales to life. 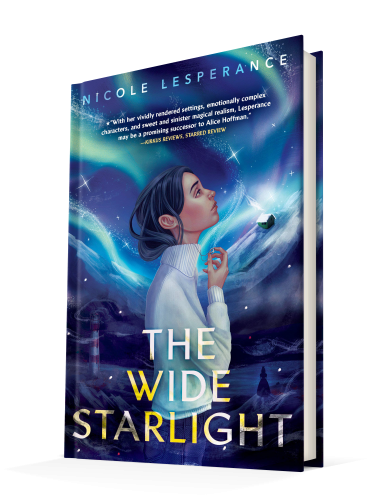