Night World by LJ Smith is the first novel in her Night World series. First published back in 1996, the series introduces young readers to werewolves, lamia (vampires), and witches.

I am a massive fan of LJ Smith, having read the Vampire Diaries series when she still wrote it, but I can say I think my age is starting to show.

Night World is very much written for young readers. Night World is a light and fluffy read. Sadly, there is not much depth to the writing or the storytelling, but that does not mean it is not worth reading.

The novel follows Poppy who is quickly diagnosed with cancer. At only sixteen, her whole life is ahead of her. Her friend James she finds out, is a vampire and offers her a choice, death, or life as a vampire with him. Poppy chooses life as a vampire, even when it means leaving everything she has ever loved behind.

This novel is a perfect light read for young readers. It does lack depth. Again, this is an entertaining read, a quick well-written read. The character dynamics are there, and the personalities are there. It only shows in its age.

As we read, the more we read, the more society changes and grows, the more that writing changes. Back in 1996, I do not think we were wholly aware as we are now. Alternatively, at least, literature was not. The bulk of Young Adult novels back in the day did not deal with today’s issue because voices were getting shut down before they could make a noise.

It shows in writing in a way. Night World is not incredibly thought-provoking; it is simply a story meant for entertainment.

Like I said above, Night World is a light story, a quick breeze to read. Furthermore, while it is well-written, it does suffer some narrative issues.

Moreover, again, there is that issue of the story lacking depth. Again, not every story has to have depth or subtext to it. Not everything has to deal with a current or social issue, so do not expect that if you read this novel.

Overall, Night World is a good novel. As the first book in a series is does an excellent job of establishing the characters and the world, LJ Smith is building here. Maybe as the story grows, it will improve as far as depth, but for right now, it is a good light, clean read for all ages. 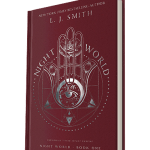