Misfit in Love follows Janna Yusuf as she deals with love, religious and cultural prejudice, and racism.

I love a good story that educates and brings diversity to literature.

Misfit in Love follows Janna Yusuf as she embarks on the last summer before college. Her brother is getting married, and her best friend, whom she likes, told her she felt the same way. So she is ready for love in the sun.

Unfortunately, nothing goes according to plan.

It is such a realistic contemporary romance for your adult readers. There is nothing fantastical or out of touch with this novel which is incredible for a romance. Sometimes romances paint this perfect picture, but real life is not like that. It is why I tend to stay away from romance novels because it is unrealistic.

Misfit in Love is so grounded, following Janna as she tries to navigate her feelings not just for herself but also for her dad and mother. It is complicated but so full-filling and relatable.

K. Ali also uses her writing to bring to life real-world issues such as racism and racial prejudices.

Janna is Islamic, but her father and mother have different backgrounds. One is Indian, and the other is Arab. They are also divorced. Janna has a good relationship with both of her parents, even her stepmother. Buy Nuah, the boy she likes, is a Black Muslim which her father disapproves of.

It was such a compelling moment to see the writing take this turn and explore racism through Janna’s father. She, of course, tells him this and then challenges his perception, pointing out that he is exhibiting the same behavior as his previous in-laws.

Ali points out that failing to recognize religious prejudice and racism or justifying it by own beliefs is a big problem. So many micro-aggressive often go under the radar that many people do not realize how they contribute to the problem.

Janna herself has an encounter with her future sister-in-law’s aunt. The latter criticizes her for wearing a sari instead of more traditional Pakistani clothing, accusing her of choosing one culture.

It is a thoughtful read and an important one that gives readers an honest look at Islamic and Muslim cultures.

Misfit in Love is a fantastic novel. It is realistic, relatable, compassionate, and educational. 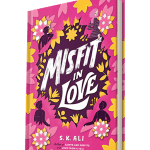