The Nature of Witches follows the pattern of bringing Witches into the real world while standing out to focus on climate change and pollution.

I loved the realism that went into developing the plot of the story.  In The Nature of Witches, Griffin gives her Witches a well-rounded foundation to coexist with non-magical folk. Non-magical people can give birth to witches and vice versa. A delicate balance allows the story to move forward out of cliches and predictability while also giving the reader enough backstory to Clara, her power, and how Witches exist in the world.

There are also five types of witches: Summer, Fall, Winter, Spring, and Ever witches. All witches are born within one season. Their power grows in the season, giving them specific control over the elements and particular storms and waning outside of their season on the equinox.

They are fighting to put nature back into balance, learning to fight forest fires, heatwaves, sudden tornadoes, and flooding brought on by pollution and climate change. It is a compelling message to the reader that our actions influence the planet because people are losing their lives in these situations, much like the witches try to ease the damage.

The message here is that things need to change; how we humans treat the planet needs to change for things to get better.

What also makes The Nature of Witches so good is the character growth that goes into developing Clara. Clara, as an Ever Witch, is the most powerful Witch in existence. Instead of diminishing each equinox, they change with the seasons, giving her power over all the seasons, changing her personality, desires, and wants.

However, the power is also too much for her. If she loses control over her power, it latches onto someone she loves and cares about, killing them instantly. So it killed her parents and her best friend, leaving her with this hate she has for herself.

Clara strongly believes that she is a danger to others and can be no help since she has no control over her abilities. However, throughout the novel, following the death of another person she loved, after reading the journal of the previous Ever Witch and training with Sang, Clara learns to accept her power.

It is such a compelling journey to watch unfold as she comes to accept her power and love herself. She spends so much of the novel hating herself and feeling guilty, wrapping herself in loneliness instead of being a part of the group. Finally, Clara learns to open herself up to love, to loving herself, and letting others love her as well.

Clara’s journey is relatable because she spends so much time denying this significant part of herself, hurting herself more than others. No one should deny a part of who they are; that is what Griffin is teaching readers. Every bit of who we are deserves to be loved and accepted.

The Nature of Witches delivers readers a compelling read, focusing on character development and climate change.

The Nature of Witches 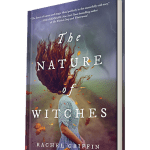