House of Salt and Sorrows is a brilliant gothic reimagining that submerges the reader in the eerie atmosphere by the sea.

Kingdom By the Sea

Craig did a fantastic job building up the atmosphere with House of Salt and Sorrows. Annaleigh lives in a castle by the sea with her father and remaining sisters. Once there were twelve of them, but they have been slowly dying off since her mother’s death, leaving the islanders to believe that her family is cursed.

For Annaleigh, she believes something sinister is going on and is determined to begin investigating after the mysterious death of her older sister.

Soon, her sisters discover a door that leads them to a magical place where they begin to dance their nights away. However, nothing is as it seems.

There is something dark and sinister happening here with her sisters. The atmosphere is perfect, capturing the somber tone of Edgar Allan Poe’s Annabel Lee. Her scene structure, building up the island, the religion, the gods, captures the essence of Poe but makes something new.

This is a fairy tale retelling of The 12 Dancing Princesses, but the gothic atmosphere makes it something entirely new and unique. Craig submerges the reader in her gothic tale, to the point that the reader can feel the sea breeze; can taste the salt in the air. It is breathtaking to be taken to this world by the sea, to this castle and lighthouse — another Poe allusion – and to see the mystery unfold through the unsettling setting.

Annaleigh was a strong character. Seeing her move, becoming aware, and staying true to herself makes a compelling character. Even when everyone around her begins to doubt her sanity, she does not give up, does not stop investigating the sinister things happening in her home.

Of course, one of the more minor characters, Kasamaras, was even more incredible. Goddess of Madness and Nightmares only appears in the last quarter of the novel, but she makes an impression. It made me want more of her, more of her madness and chaos. She was brilliantly done, her and the other gods. In the end, I wanted so much more of her in the story.

This highlights Craig’s ability to use her storytelling to her advantage and make the characters impactful even when given such limited time in the story. In addition, she made the readers want more of the gods and more of the mythology, which helped create the intensity with the rising tension and character dynamics.

However, there were some issues with the family dynamics. The family dynamics were a little strained. Annaleigh’s older sister was intolerable. Her tone, her attitude, was unlikeable, and it left much to be desired.

House of Salt and Sorrows is spectacular. It reinvents a fairy tale while delving into a gothic fantasy that is breathtaking.

House of Salt and Sorrows 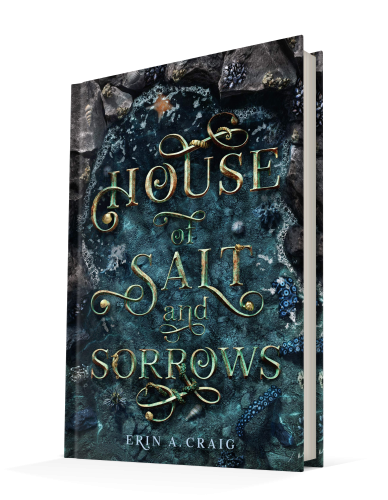