Lore Olympus: Volume One comes from the brilliant mind of Rachel Smythe. What started as a weekly comic on WEBToon has become so much more as it deals with heavy themes while taking a unique turn at adapting Greek Mythology.

Huge Greek Mythology nut here. I am sure you all know that by now if you have been following. I love to pick up anything even remotely close to Greek mythology, and this was no exception.

It came across to me as an ad on Facebook, and in the beginning, I would ignore it. Then, however, one day, I thought, “what the heck, let us see what this is all about.” Instant love.

This is the story of Persephone and Hades, and it is both charming and brilliant. Smythe put her heart into this, into telling this story and bringing it to life. Her characterization is spot on, and Hades and Persephone are brilliant together. Their evolution in just these 25 episodes presented here is fantastic.

The reader understands who Hades is and his dynamic with his brothers, how he fits into the world of Gods. Hades is still dealing with the trauma of being the first-born son eaten by Kronos. His whole narrative, his relationship with Minthe, shows just how little he thinks of himself. So immediately from the beginning, you are captivated by this broken character, this powerful man who thinks so little of himself, who thinks he deserves so little love in the world.

And then he meets Persephone.

Persephone also has her problems; her insecurities allow her to see Hades as a good man. Nevertheless, this connection between the two forms a friendship that forms from them talking and opening up to one another.

What I also love is the artwork. Smythe is such a fantastic artist, and yes, she does all the artwork herself. Her use of color to give the gods their skin tone speaks volumes to their characters. I honestly had not thought about it until this moment, but it is a good reflection of who they are. Furthermore, if you have studied the meaning behind colors, you will surely understand the connection between their skin and who they are.

Smythe is expressive in her artwork, using dark edges, shadows, and precision to bring to life her characters. She takes chances with her artwork, being as expressive as possible, making the graphic novel even more enticing. There are so many small details that make up each panel, each meaningful in their way to build up her version of Olympus and the Underworld.

Moreover, her rendition of the Underworld is beautiful.

There is depth to the narrative, which deals with “physical and mental abuse, sexual trauma, and toxic relationships.” However, the story has hope within the pages. Smythe never loses that in her writing. She gives readers hope that in the darkness, there is a light that can be found. The journey is never easy, is never fast, but can be overcome with the right people beside them.

Lore Olympus: Volume One is incredible. I may have already read it, tuning in every Saturday to see the latest episode, but I had to purchase a copy, not only to support the author but to relive the love I have for this series. 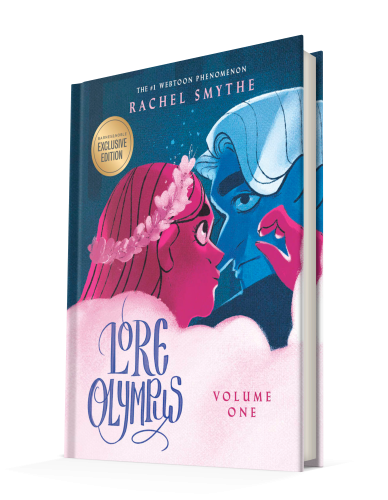