These Hollow Vows follows one Brie as she enters the dangerous courts of the Fae in a quest to save her sister from the Unseelie King.

When it comes to Fae in fiction, especially young adult fiction, what is a struggle is finding something unique. The market right now is as saturated as vampires were when Twilight was big. So it was great to see another story with Fae compellingly brought to life.

Ryan does an excellent job of bringing the Seelie and the Unseelie courts to life. They were able to incorporate traditional lore uniquely and creatively. They call them the Sun court and the Moon court, the Unseelie throne, the throne of shadows. Ryan has a bright imagination, giving the courts their unique mythology and history to drive the story forward.

Ryan also adds the wild Fae into the mix to subvert the readers’ expectations regarding the Fae. Unseelie are usually thought of as malevolent Fae, while the Seelie are considered the more benevolent ones. While that is true in some cases, in most, as the story progresses, it is not.

Once again, Ryan uses her skill as a writer to develop the Fae into something different, making the story more engaging for the reader. The idea of magic here is that Brie, a human, has fae magic, which gives the reader pause. There is enough intrigue there to keep the reader on their toes.

What is more, is that it is unpredictable. There are aspects of the story that Ryan keeps hidden in her storytelling. When reading it, I thought the story would go in one direction. However, Ryan was able to keep me engaged not only with her unique interpretation of the Fae but in her ability to take the story in another direction in a jaw-dropping way.

These Hollow Vows is also very good with its characterization. Brie is a great character, and I loved her from the start. The book’s opening has us following her as she breaks into a loan shark’s house, sneaking past his magical barriers to steal his money. While this also gives the reader a great introduction to the world, it also gives the reader a sense of who Brie is as a character.

She lives for her sister, willing to do anything for her sister. The reader can sympathize with her, empathize even with that familial bond. Her sister is not naïve and seems as mature as her sister, but she has a warmer disposition, making her likable. So, the family dynamics are very well done here.

I also enjoyed the journey of Brie. She has many prejudices regarding the Fae, but we see her grow beyond them throughout the novel. As much as she loves being human and wants to remain human, she understands that much of what she knows is based on misinformation. Just like there are good and bad humans, there are also good and bad Fae. It is their actions that define them. So seeing her come to terms with that was well done and executed and played up the dynamics between the characters.

Near the end, the reader also sees Brie shine as she uses her cleverness to achieve the impossible. She is intelligent and clever, and seeing her wrestle with her morals and hypocrisy makes the reader connect to her. This connects to her familial bond with her sister and, again, makes her a character the reader can easily connect to.

These Hollow Vows is an excellent start to a new series. I am personally so excited to see how this plays out. Moreover, while I am thankful the author does not dive into the love-triangle trope, its hint does raise the tension that is sure to bleed into the next novel. Finally, let me just say that the ending was jaw-dropping, and I most certainly did not see that coming. 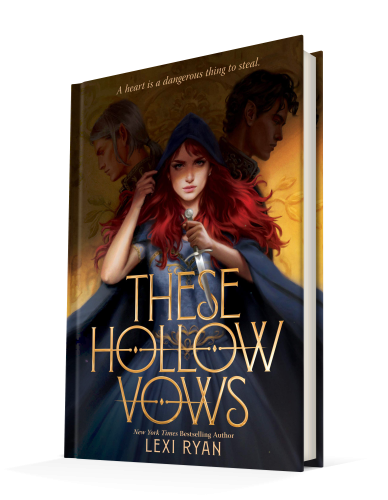 0 thoughts on “Review of ‘These Hollow Vows’”