A Comb of Wishes spins a new tale on mermaids by tapping into Caribbean folktales to give readers a story of grief and how it can drive one to lose themselves.

Stringfellow wove a beautiful story here following Kela as she struggles with the loss of her mother. Her final words to her mother were, “I hate you,” and then her mother died, car sliding off a cliff in the rain. Kela is haunted by this, her last memories of her mother being darkened by harsh words, and she finds herself lost. Kela has isolated herself from her father, her best friend, her community, keeping to herself as much as possible.

Many people lose themselves in their grief, especially of someone they care for dearly. However, Kela finds a relic that gives her what she wants more than anything: her mother alive.

A Comb of Wishes could have taken a wrong turn in many ways but instead follows a natural path, switching between the mermaid Ophidia and Kela’s respective perspectives.

Both are grappling with grief but in very different ways. Ophidia has had decades to stew in her grief, blinded by the anger of the loss for years. As a result, she was isolating herself from even her mermaid sisters. For Kela, her grief is still at the surface, keeping her away from her friends and family.

Furthermore, it was beautiful in that way. It was terrific how Stringfellow put the story together and captured the characters’ grief realistically. She gives the characters some closure without washing away the grief. The grief is still there, but it is not drowning the characters by the end, which makes the story so compelling.

A Comb of Wishes is an incredibly thoughtful novel. Stringfellow tells the story in a way to captivate the reader, tapping into her Caribbean roots to tell the story in a way it would be told traditionally: orally. It is lovely to see her capture her culture here, tap into it and lure the reader in with this way of storytelling. It builds up the atmosphere, the voices, and the mythology surrounding the community of St. Rita.

It was also wonderful to see this sense of sustainability. Kela makes jewelry, but only from discarded items from the beach, sea glass, rocks, but never seashells which could be home to other small creatures. I love how Stringfellow could embed this thought of sustainability in the story without coming off as overbearing. It was beautiful to see these ideas put in a children’s book because it offers up a teaching lesson without sounding like a teaching lesson.

Overall, it was an incredible story.

A Comb of Wishes 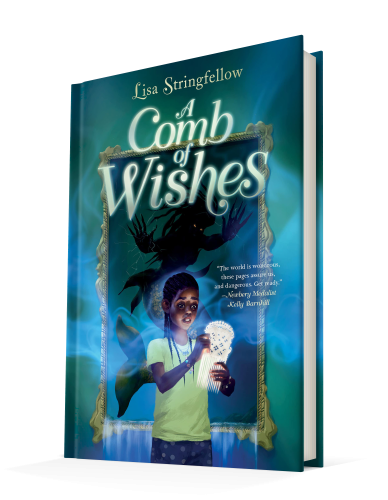