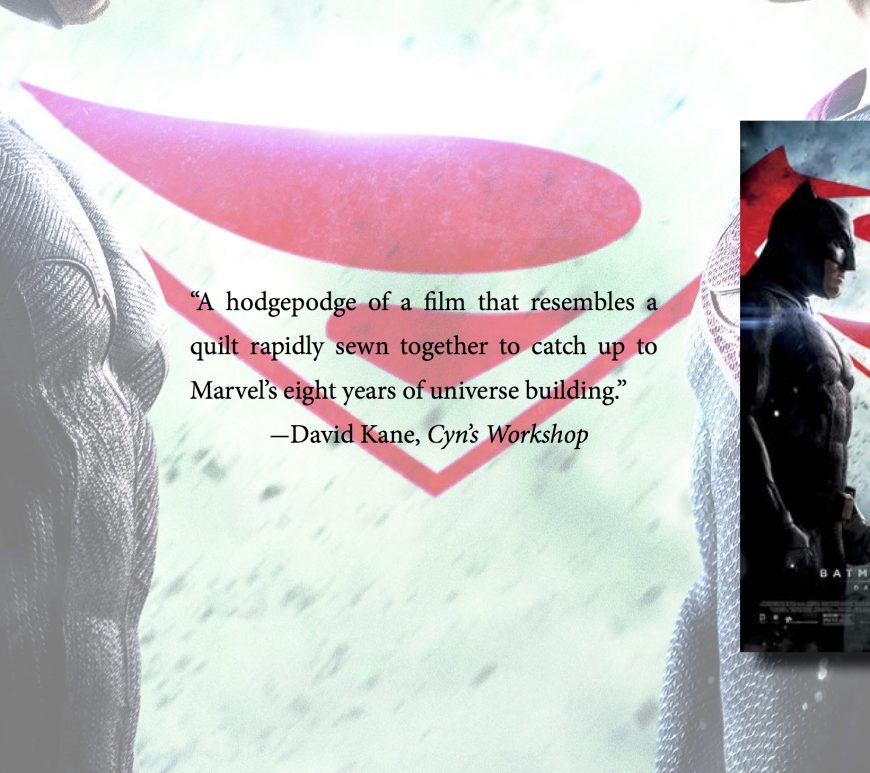 As the title declares, this movie has two enormously famous superheroes, and we’re led to believe Justice will Dawn as a result of them facing off. But with a mouthful of a title, we have a little trouble figuring out exactly what kind of movie Batman v. Superman: Dawn of Justice is trying to be. On the surface, it’s a long one. From what I could tell, Zack Snyder wanted to fit both a Batman movie and a Superman movie into its two and a half hour runtime. Those two unraveling entities finally meet up at the end for a bombastic finale that gets tacked on after the fight that the title promises. Individual parts of the movie aren’t bad, but the execution of putting them together leaves much to be desired, and we come out with a movie that is, in a word, a mess. END_OF_DOCUMENT_TOKEN_TO_BE_REPLACED

By:  Eric Eisenberg It would seem that Jennifer Lawrence and director David O. Russell got along famously on the set of Silver Linings Playbook. Not only did their collaboration lead to the actress’ second Oscar nomination in the Best Actress category, she also recently signed on to appear in Russell’s next film about the famous Abscam sting, formerly known as American Bullshit. But while that movie is still … END_OF_DOCUMENT_TOKEN_TO_BE_REPLACED

This is a very good movie. What blew me away most was the fact that this actually happened. As I was watching this movie I was thinking that maybe some things were exaggerated but they were not. I mean the fact that Ben Affleck was able to create this adrenalin type movie and keep it so true to history and the facts was amazing! I … END_OF_DOCUMENT_TOKEN_TO_BE_REPLACED