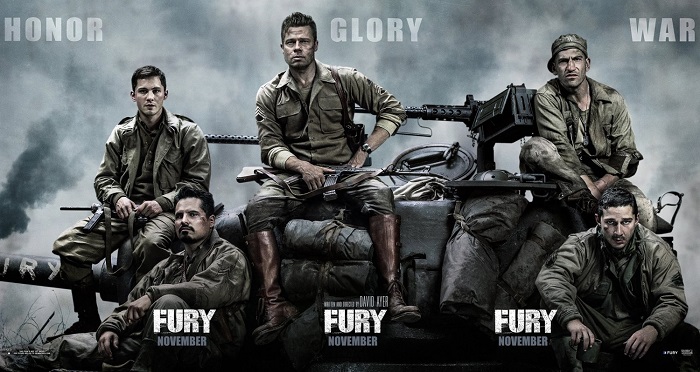 April, 1945. As the Allies make their final push in the European Theatre, a battle-hardened army sergeant named Wardaddy commands a Sherman tank and her five-man crew on a deadly mission behind enemy lines. Outnumbered and outgunned, and with a rookie soldier thrust into their platoon, Wardaddy and his men face overwhelming odds in their heroic attempts to strike at the heart of Nazi Germany.

Fury is an amazing movie with an amazing ensemble that really brought to life all the harsh and painful realities of war. Not just what it’s about but rather what it does to an individual.

END_OF_DOCUMENT_TOKEN_TO_BE_REPLACED

By: Eric Eisenberg It seems Shia LaBeouf won’t be the only young actor soldiering up with Brad Pitt for David Ayer‘s World War II tank drama Fury, as Deadline is now reporting that Logan Lerman, best known for playing the titular character in the Percy Jackson movies, has also signed on for a role in the new film. According to the site he will play, “Norman Ellison, an Army typist and the youngest … END_OF_DOCUMENT_TOKEN_TO_BE_REPLACED

By: Katey Rich Every time we see a new casting rumor about Noah, it means we’re one step closer to actually seeing Darren Aronofsky’s Biblical epic, his follow-up to Black Swan that will tell the famous story of Noah and the great, world-ending flood. We know that Russell Crowe will be playing Noah, and thanks to a few recent updates we know that Logan Lerman … END_OF_DOCUMENT_TOKEN_TO_BE_REPLACED

Former soaps and Disney channel star Leven Rambin got a huge break when she was cast in The Hunger Games, and even though she was only onscreen for a few brief minutes as the vicious and beautiful Glimmer, a rising tide as big as The Hunger Games really does raise all boats. Rambin’s newest role won’t just be in another big, effects-heavy potential blockbuster, but … END_OF_DOCUMENT_TOKEN_TO_BE_REPLACED