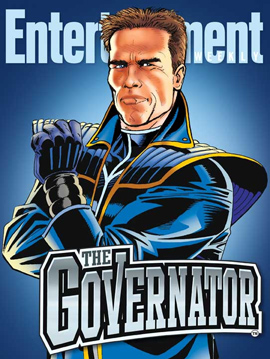 Arnold Schwarzenegger dropped plenty of hints about what he wanted to do after two tumultuous terms as governor of California. Among other things, he slyly suggested he might like to work for President Obama. He even hinted he’d like to reboot the “Terminator” franchise that made him famous.

But in the end, Schwarzenegger is settling for what he hopes is an even more iconic job: cartoon superhero. The former governor tells Entertainment Weekly he’s developing an animated TV show and comic book series called “The Governator,” based on–you guessed it–an ex-governor who moonlights as a secret superhero crime fighter.

“It takes my entire career, if it’s body building, if it’s acting, if it’s the governorship and combines it into one,” Schwarzenegger tells EW in a video posted on the magazine’s site. “The Governator is designed to fight crime, to fight natural disasters … this guy will jump and solve the problems.”

We can imagine how some eager junior executive might have pitched the project in a studio confab: It’s “The Incredibles” meets Schwarzenegger’s 2003 recall campaign meets the California budget crisis. And just think of the merchandising back-end—action figures, DVDs, the works!

And that doesn’t seem too far off the mark, to judge by what EW is reporting. The former governor is developing the project with comic book legend and Spider-Man co-creator Stan Lee, who tells EW that the project will incorporate all aspects of Schwarzenegger’s real life. That includes his wife,  journalist Maria Shriver–who Schwarzenegger admitted hadn’t yet been told of the project. “I think it will be a big surprise for her,” he tells EW.

According to Lee, The Governator leaves office and decides to build a “secret high-tech crime-fighting center” under his house in the tony L.A. suburb of Brentwood, where Schwarzenegger lives in real life. Like Batman, the animated Schwarzenegger will have a hideout–“the Arnold Cave”–and team of colorful sidekicks. One is Zeke Muckerberg, who–like the character’s obvious inspiration, Facebook founder Mark Zuckerberg–is a computer whiz who acts as The Governator’s cybersecurity expert.

But what’s a comic-book superhero without some powerful super-villains? According to EW, the animated Arnold will face off with an evil organization called “Gangsters Imposters Racketeers Liars & Irredeemable Ex-cons”–or, as you might better recognize them, GIRLIE Men, for short.

“I love the idea of a control center below my house with a path so that boats and submarines can go right into the ocean,” Schwarzenegger excitedly told EW. “In the cartoon, my house is much closer to the beach than where we live, but, you know, it’s a cartoon.”

The former governor insists that being a cartoon superhero is the next best thing to being President of the United States–a goal that’s legally blocked to him since he wasn’t born in America.

“Otherwise, I wouldn’t be standing here in a leather jacket, I’d be dressed up in a suit,” Schwarzenegger said.

4 thoughts on “Arnold Schwarzenegger returns as ‘The Governator’”