The tenth novel in the ‘How to Train Your Dragon’ series, continues to follow the riveting and tough journey of young Hiccup as he tries to find a way to bring peace between Dragons and Vikings. With his trusty little Toothless to help him, what could go wrong? 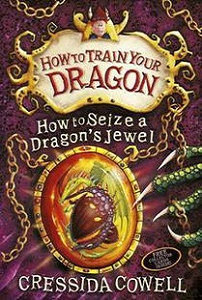 Series: How to Train Your Dragon

The Dragon Rebellion has begun, bringing the Vikings’ darkest hour upon them. Hiccup has become an outcast, but that won’t stop him from going on the most harrowing and important quest of his life. He must find the Dragon’s Jewel in order to save his people…but where should he begin?

The tenth novel in the How to Train Your Dragon Series, follows the hero Hiccup Horrendous Haddock the Third, as he searches for the last lost item that can help save both the dragons and the Vikings from ultimate war and destruction. Written by Cressida Cowell, How to Seize a Dragon’s Jewel, was published on April 22, 2014 by Little, Brown and Co. The novel continues to tell a coming-of-age story as it develops a fantastical novel about Vikings and dragons.

This novel is definitely not just for children anymore. As readers follow young Hiccup, you have to realize that a year has gone by and he is an Outcast, while his family and tribal men have been sentenced to live as slaves, branded as such. Hiccup goes through the emotion of loneliness and sadness as he travels alone beside his three dragons. Nevertheless, readers also have to remember that he is alone, hunted by both dragons and Vikings. It’s a terrible fate this young hero has found himself in, but it makes it worth the read. Readers are able to see the strength within the character. Hiccup really is a strong protagonist, built up in a wonderful way because he sees the world around him and he takes into account what consequences his actions may cause. It’s a very thought out novel, with a lot of fun twists and turns.

The narration is also very interactive. Not only is the reader in the moment, but readers have to remember, Hiccup is telling this story, Hiccup who is now an old man, is re-telling this story to the reader and both his personality and his younger personality stand out to the point where they are not confusing, but they are interchangeable. It’s a fun aspect for young readers to be able to see this happening, to really believe that this is some sort of fantastical memoir. That’s, in addition to the wonderful characterization, is what makes this novel a captivating novel.

What makes How to Seize a Dragon’s Jewel a fun read for older people is, it’s light, it’s funny, but it also has a lot of dark moments that make the reader thing “oh dear heavens, how can this get any worse”, because it’s not easy for this hero; his quest isn’t easy.

How to Seize a Dragon’s Jewel is the perfect novel for parents to read to their children, or alone, and it’s an easy enough read for young ones to get into reading. The novel is fast paced, action packed, and full of wonderful, fun quirky characters that jump off the pages. But when any adventure, there is sadness and darkness, and this novel shows that while life can get dark, there is always a silver lining and that’s a great message for any reader, no matter the age. ★★★☆☆ (B+)