Taking place in revolutionary Paris, Nemesis and the Swan follows Hélène d’Aubign as she recounts her life before prison and the dreaded guillotine.

Admittedly, the pacing of that opening chapter failed to capture this reader’s attention. However, as the story progressed, it became an engaging look at revolutionary Paris.

Bandy opens each chapter with Hélène in her prison cell. Helene spends this time recounting her life, trying to figure out what got her there. As a character-driven narrative, Nemesis and the Swan is written with compelling prose to lure the reader into the story.

A character-driven story, it follows Hélène through time, highlighting her strength and perseverance to change the direction of her life. As the daughter of the Marquis, Hélène is a part of the aristocracy that the revolution saw to destroying. Examining the revolution through the eyes of an innocent, the novel will prove engaging to readers interested in the French revolution.

This story examines the life of the aristocracy, highlighting how many of them were innocent while also highlighting the need for change.

Following Hélène on her journey is also quite captivating. While the reader follows her through time and sees the revolution through her eyes, they see how she struggles to reconcile her identity with whom she wants to be with her upbringing. Hélène wants to be more, she welcomes the change, recognizing the need for it, but there are so many secrets of her past she also seeks to unravel. It is a compelling journey for her as she tries to find herself.

Nemesis and the Swan is a compelling novel that will relate to readers, those who seek not only to change society but also readers who are trying to decipher their pasts to be their true selves.

Nemesis and the Swan 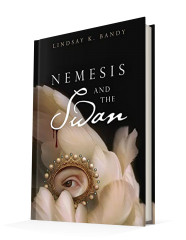