Excellent novel. Mayhem was a great blend of cult classics, using elements from The Lost Boys and The Craft, to create a great atmosphere in the novel. Not only that, but Laure even includes the Frog Brothers, tying this novel to The Lost Boys universe in a marvelous way. Furthermore, Neve, well, she is so much like Nancy from The Craft, from her attitude to the way she dresses.

Now, while this novel has all those elements, Mayhem has its own story to tell.

Laure has two stories going on in this novel, but they coexist beautifully. The sub-story is about Mayhem coming to terms with the darkness in her life and accepting the strength, while the overarching story is about the magic of the Brayburns.

Mayhem has been living in fear of her stepfather who continuously abuses her mother until he finally crosses the line, forcing the girls to move back to Santa Maria. Santa Maria is where Mayhem begins to develop as a character.

Mayhem’s character development seems a little stagnant at times, but throughout the story, with the combination of the magic, Mayhem grows. She faces her past, confronts her mother, and becomes more than just this silent introvert. By delving into the past of her ancestors and the mystery surrounding Santa Maria, Mayhem discovers herself.

What also helps her grow are the character dynamics. Mayhem is a lot like Sarah from The Craft, the perfect foil for Neve’s darker edge. Neve has so much anger and darkness in her, and the magic, it does begin to corrupt her. However, unlike in The Craft, these girls find their way back to one another and form a sisterly bond that allows them to reconcile their differences.

Jason is admittedly a rough character. His animosity towards Mayhem comes off as harsh and is off-putting. It has no basis other than to create tension between the characters. However, as the dynamics develop, he ends up becoming more likable.

The story is impressive. Laure utilizes using the past to create an incredible backstory for the Brayburn women, giving the world here a strong foundation. Cult classic references allow the novel to have a vibrant atmosphere and give the story excellent pacing. It was a breeze to read, and fun too. 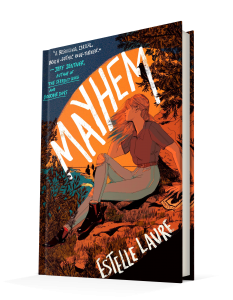 One thought on “Review of ‘Mayhem’”