Rain by India R. Adams is a young adult paranormal romance. Rain is a fantasy novel and boy, was it a doozy.

You know, I read the Twilight series back in high school, loved it, own it, but there is a reason I have not picked it back up to see if it aged well. I am well aware that it probably has not aged well and I do not want to tarnish the memory of it.

Rain is Twilight, and it was not a good rendition of it.

Now, that is not to say it is poorly written, it was pretty decent structure-wise, but the main issue of this novel are those damn character dynamics

Rose is a Mary Sue. She is oh so perfect and that makes her unrelatable. Then there is her relationship with her best-friend Gunner. It is like Jacob and Bella. I am serious. He is in love with her and she is attracted to him enough to try in a relationship with him. However, it came off as forced and weird. Reading their relationship felt almost like watching incest unfold.

Then there is the dialogue between them. He is always calling her “baby,” and it was just so annoying. Reading Gunner was annoying and his whole dynamic with Rose was just forced and uncomfortable. There was a lack of chemistry between these two characters who are supposed to be friends. And, the whole reason the romance was ill-fitting was because of Rose’s narrative. There is no emotion tying them together, leading to the dynamics to come off as forced.

Then there is Ryder. Ryder is an elf, who ends up biting Rose and injecting her with venom to help her heal. He sounds like Edward and acts like Edward basically making him Edward Cullen.

Moreover, his tone and language were stiff. He does not come alive, his emotions, his personality, it is lacking and does not create a strong connection with Rose. Considering how coloqiual the other elves are, it does not fit into the narrative that he would have no understanding of human norms.

However, what is annoying about their relationship is their automatic “I love you,” even before they meet.

The take on elves and trolls was interesting, but at the end of the day, this novel feels like bad Twilight fan fiction and I feel bad saying that because it feels harsh. I was so intrigued by the cover and synopsis, and I was thankful when the author provided me with a free copy to review. Nevertheless, I was utterly disappointed by this novel. The dynamics were lacking, they came off forced, the language and tone between characters did not match, and the love triangle trope was cliché at best.

Ultimately, Rain was a big disappointment. 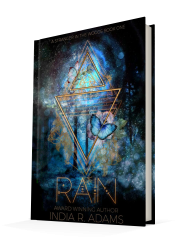