The second novel in the Warrior Bards series, A Dance with Fate, is an incredible sequel.

This novel picks up a few months after The Harp of Kings left off, with Dau and Liobhan returning to Swan Island and Brocc living in the Otherworld with the Fae.

Admittedly, at first, it seems like two separate stories are going on here. One plotline follows Dau and Liobhan while the other follows Brocc. However, they meld together so wonderfully, giving the plot a deeper meaning, and developing it into something beautiful. That is what is so great about Marillier‘s writing, how she tells a story, and involves the reader.

At first, I was worried the novel would not include Brocc since he went off, but Marillier found a way to give meaning to his side of the story, to offer the reader a thoughtful and compelling narrative.

Brocc is an excellent character because while he is a warrior, he is also a bard and he uses both sides of himself to look at the world. The Crow Folk continues to attack his new home, but instead of violence, Brocc seeks to understand the enemy so that he can find peace without bloodshed. He is wise, but not without fault. Marillier balanced him to make him relatable and compelling while ensuring that his side of the story makes sense to the overall plot.

The same goes for Liobhan and Dau. These two characters have come so far from the last novel, and they continue to grow. They went through so much in the previous novel and how, when an accident forces Dau home to his abusive brother and negligent father, they only have each other. The new challenges bring about more issues, allowing them to bond and grow together. There is a substantial shift in their relationship, something hinted at in the previous novel, and the way Marillier builds up to is incredible.

A Dance with Fate is a thoughtful story. Marillier uses the story to grow the characters, even more, to build the dynamics and strengthen their personalities. Dau faces his dark past and comes out stronger for it, and he makes incredible strides to undo the evil that has left him scarred. Of all the characters, he goes through the most changes.

What is more, is the story reflects it. The story is so different from the previous novel, but it is still as thoughtful. It addresses abuse, violence, and peace, making it incredibly impactful on the reader and no less enjoyable.

Overall, A Dance with Fate is an incredible read that moves so quickly, engaging the reader with every word.

A Dance with Fate 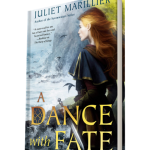