All the Stars and Teeth is an exciting novel. Following princess Amora, whose family possesses soul magic, when Amora loses control, she goes on the run with a pirate on a quest to save her kingdom and herself.

It was such an interesting and unique novel filled with various types of magic ranging from transformative, to elemental, to even curse magic and mermaids, giving the story its imagination. However, the quest, the adventure that Amora goes on with the pirate Bastian and betrothed Ferrick.

The dynamics between these three characters was well done. Ferrick has healing magic and comes from a noble family. He is the gentler of the trio, and yet just as headstrong. Ferrick may just be a side character, but he resonates off the pages and grows throughout the story. His relationship with Amora also grows.

Initially, she despises being engaged to him and thinks of him as weak, but throughout the story, she gets to see him as more and their friendship grows. Thankfully, there is no love triangle in the novel, as Grace focused more on developing these characters and giving them vibrant voices and dynamics.

Amora is the main character, and inner tension and turmoil reflect her growth as a character. Amora believes so strongly in doing what is right for her people, but that does not mean she does not live for herself. She has many fears of not being good enough or powerful enough to lead her kingdom. However, throughout her journey, uncovering her father’s neglect and her ancestor’s secrets, Amora’s attitude changes, and her relationships with Ferrick and Bastian grow.

The characters balance each other out perfectly, helping each other become stronger through the obstacles they face. They bond and become quite the team. Furthermore, the Mermaid makes a brilliant addition to the group.

The story is what grabs the readers’ attention above the rich and well-developed characterization and dynamics. The world here is well structured. The islands make up the kingdom, each one the home to one magic. Taking on that specific magic means that they must live on the island that practices it. It is interesting to see how the magic is interpreted in the story, especially soul magic, and curse magic.

Soul magic is derived from blood and bones, allowing Amora and her family to see the soul of an individual. It has much history to it that is explored throughout the story, giving the reader a complex and in-depth view of how the magic works in this world.

The curse magic, while interesting, the details of how it works needed to be a little clearer. Near the end, the mechanics become a little fuddled and confusing, especially with the revelations of the past and the secrets Amora discovers about her kingdom and her ancestors.

All the Stars and Teeth is a thoroughly entertaining novel. It has strong character dynamics and takes magic into unique territory, making the story thrilling and entertaining from beginning to end.

All the Stars and Teeth 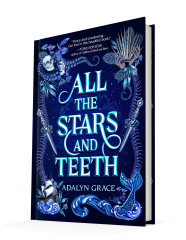