Vicious Spirits is an incredible sequel that expands upon the folklore that started this series. However, this scope of this novel has expanded by adding in Junu’s and Somin’s perspectives of the novel. These additions add more richness to the novel, allowing the depth between the dynamics to grow.

Vicious Spirits begins a few months after the events of Wicked Fox, where the cast of characters are still reeling from the events of the previous novel. Miyoung is still missing her bead and living as a mortal but complications begin to arise as her bead was tied to the demise of her mother.

The evolution of the plot was masterful. The story and how it has evolved is very intricate and yet so easy to follow. Cho has done a brilliant job bringing of introducing more folklore to the story. Junu is a Dokkaebi, a goblin of Korean folklore, and much like the previous novel, this novel has inserts chapters exploring his origin and giving his character more depth.

Learning about Junu is an incredible adventure for the reader because it ties so neatly together with MIyoung’s story. Moreover, it also gives the reader more insight into his personality, tightening those dynamics with the other characters.

It is Junu’s past that has come back to haunt him giving the story its rich foundation. The story is neat; it holds together nicely, drawing in the reader. Cho’s take on Korean folklore, her exploration of the storytelling, expanding the narrative, it evolves the story. Vicious Spirits takes the folklore and story and blossoms it into something incredible.

Now, while the story itself is fast-paced and gripping, the characters also give readers a story worth reading.

Wicked Fox only followed Miyoung and Jihoon, but now the story explores Somin’s and Junu’s perspectives. While the story explores the folklore surrounding Dokkaebi, it gives the reader a stronger understanding of Junu. The reader gets to know him; they get to explore his past, his grief and heartbreak and see him more as just a mythical being. He is more human in this story, allowing those dynamics to develop and strengthen as the story goes on.

The same goes for Somin. In the first novel, she was just Jihoon’s best friend, but now there is more depth to her. Thrust into a world filled magic, Somin has to learn to readjust her outlook. However, the ghosts, the magic, they awaken something deep inside her. Somin’s pain and grief, everything she keeps bottled up, makes her more relatable to the reader. Much like with Jihoon, the reader can understand her more.

Cho has given the characters and their dynamics more depth by adding in these perspectives and giving side characters a voice. The romance unfolds wonderfully, creating a vibrant atmosphere, drawing in the reader. These are characters that can connect to the reader on an emotional level as they are as complex and real, more than just names on a page.

Vicious Spirits is an incredible sequel. Vibrant and full of life, this story pulls the reader in and takes them on a beautiful adventure. 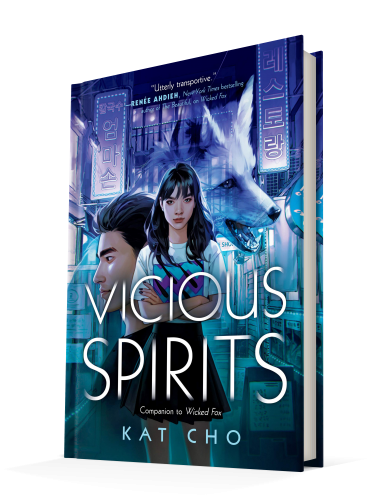