What a fantastic novel. The Ravens takes readers to college, where a coven of witches hides as a typical sorority.

The Ravens splits between Scarlett Winter and Vivi Devereaux. Scarlett is a Junior now at Westerly College and has long been part of the Kappa Rho Nu coven. Vivian and a Freshman with no idea she is a witch. It is a compelling story about two girls trying to figure out whom they want to be in life. Vivi does not want to be like her mother; she wants to redefine herself in a way that feels true to her. Vivi wants to stop being the girl always looking in and instead wants to be a part of something.

For Scarlett, the same can be said. She is struggling to find herself, living under the pressure of her family’s legacy.

Moreover, in the midst of all this, while trying to figure out who they are and whom they want to be, they have to contend with a missing sister, a vengeful sister, and someone threatening to expose them all.

It is an incredibly fast-moving story that keeps the reader engaged by delving into the character’s narrative and while building up the tension of the plot. The rising tension leaves no room for the reader to put it down as if the reader is spellbound to read the story. That is what makes it so good. The tension, mystery, and black magic that haunts and threatens the characters, leave the reader gasping. All these elements together keep the reader utterly hooked.

As mentioned above, The Ravens is about the characters as it is about magic and mystery. Vivi and Scarlett are essential to storytelling.

It would be easy for the authors to fall into the trap of cliche, but thankfully they stay clear of it. Admittedly, there are times when Scarlett comes off as that stereotypical mean girl, but her development throughout the novel is incredible.

Scarlett goes on an intensive journey, focusing on her internal struggles, the pressure to live up to her family’s legacy. She grows so much throughout the novel and does not lose her ferocity or her sisterhood. Scarlett has so many chances to put herself first, but instead, she puts her sisters — her coven — above it all, sacrificing friendship and love to keep them safe. It makes her incredible and allows the reader to connect to her on a deeper level.

As for Vivi, the only issue with her characterization is that it feels like two different people are writing her. The ferocity Vivi has in her opening chapter gets lost as she goes to college. There are times where her naïve innocence does not coincide with her inner narrative. With Vivi, it is clear that two different people are writing this novel as if they are trying to make her fit within the plot.

The Ravens left me hungry for more. Morgan and Paige did an incredible job of bringing this story to life with a great plot, strong characters, and a powerful message of sisterhood. 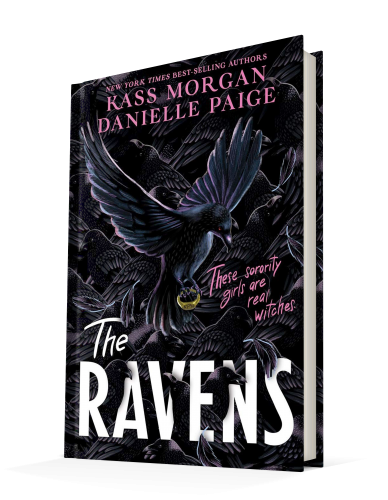