What a compelling novel. Star Daughter is reminiscent of Neil Gaiman’s Stardust as it follows Sheetal as she embarks on a journey to the celestial court to save her father. Imbued with Hindu mythology, the story is filled with magic and wonder as it offers readers a brilliant read.

Thakrar did a masterful job with her storytelling. For a debut novel, Star Daughter is polished and thoughtful in its storytelling and remarkable. Sheetal is half-mortal and half-star, her mother leaving her at age seven to return to the celestial court, leaving a hole in the family. Gifted with silver hair that she keeps hidden beneath dye, Sheetal struggles with her heritage and the secrets that came with it.

It is a beautiful story that connects to the reader on an emotional level. Sheetal is dealing with the abandonment of her mother, the secrets of the past, her power, and much more. Giving the story dimension and color, Thakrar creates this celestial court full of stars that are also muses for artists.

Star Daughter is a fun and imaginative story that captures the wonder of the stars. Sheetal’s journey allows her to reconnect with her mother and reopen old wounds, allowing her to handle them. There is so much depth to the story, unveiling the dark history of the star court. Sheetal has to contend with more. Together, these elements give the story its momentum, keeping the reader engaged in the development and wonder of the story.

While the story is filled to the bring with fantasy and wonder, the characters allow those elements to shine. The reader gets to experience how the stars inspire and give life to art. Sheetal is a star at her core, and the cost of helping her father is entering a competition about inspiration.

Sheetal’s experience makes her a relatable and compelling character. She has to contend with the mix of emotions she has within her. The relationship with her family and friends are filled so such a range of complexities, creating a strong dynamic between characters. Sheetal grows so much as a character, going through the motions of what it means to accept her family and herself. In the end, the story is all about Sheetal learning to forgive and love herself.

Star Daughter is a brilliant read. It is full of magic and wonder, connecting to the reader in marvelous ways. 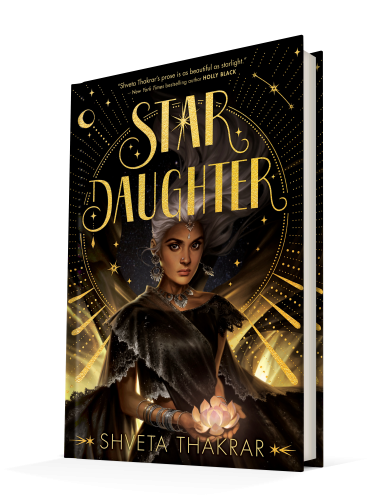