Do you know that movie Jumper starring  Hayden Christensen? Well, that is what Windswept is about. Now, that is not to say that it is entirely unoriginal, but that film is the backdrop for this novel.

The biggest problem with this novel is how unoriginal it does feel. The premise follows Sam and Reid, two teenagers who meet and discover they are more alike than they thought. Reid can transport himself anywhere in the blink of an eye; he is part of a people called Drifters. However, there are others, enemies of the drifters who can slow down time. Okay, now that is cool for the story, to see these two sects of people with powers at war, in a sense, with one another. However, the story itself still falls short as it plays off its powers and falls into predictability and clichés.

Windswept is not a bad novel, but it is unoriginal making it dull. There is romance, action, and science fiction that makes it exciting but unfortunately, on every page, my reaction was “read it,” “saw it coming,” “predictable.”

Another thing that Cole failed to do was create engaging and memorable characters. Sam and Reid are forgettable. Nothing about them stands out. Right now, I cannot even remember their descriptions. They fall short and despite having strong dynamics, their relationship is precarious for the reader.

Reid is stalking Sam, and it makes their dynamic and relationship just a little uncomfortable for the reader. There is nothing romantic about stalking someone. Yes, it begins with him following her home to return her hat that she left on the subway but the way it evolves is more creepy than romantic. Especially when Sam calls him out on stalking her, it just takes away from the romance between the two characters.

Sam and Reid also fall into cliché tropes. Sam has parents from both sects, and she is all-powerful while Reid is the bad boy who gets reformed. It just, once again, comes off as unoriginal.

Once again, while the story itself is somewhat unoriginal, the characters fall a little short the author has a talent with storytelling. The storytelling is good; it has good pacing and the characters do go on an adventure and grow. Unfortunately, I just could not get that movie Jumper out of my head. I saw it once, on television, years ago and it was the first thing that came to my mind with this story. Windswept was just too unoriginal for my liking. 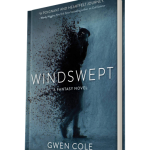