The Good Hawk is a young adult historical fiction fantasy novel with very compelling characters. The best things about this novel are how Jaime and Agatha drive the plot forward. The story follows Agatha and Jamie, who embark on a mission to save their entire clan from invading Vikings. Now the problem with these two is not a problem to the reader but rather to the surrounding characters.

Jamie is a strong male character who suffers from a fear of water, anxiety, and panic attacks. It makes him a compelling character because readers do not see many characters in fiction with anxiety and prone to panic attacks. Dealing with mental illness is still on the rise in literature, which is very commendable. It allows the reader to connect to these characters, letting the reader know that they are not alone and that their anxieties and fears do not have to control them.

The is the purpose of Jaime as the male character in this novel. He is central to the plot in letting the reader know that he is not going to let his anxieties and his phobias limit him; instead, he will just deal with them as they come along and rise above them. It is a slow and steady journey. It does not happen in a snap of a page but realistically and compellingly, connecting to the reader.

It is apparent, given the tone and structure, that Agatha has a form of autism. However, just like Jamie, Agatha does not let that limit her. Agatha is smart and innovative, and the way the author highlighted how she sees the world differently. It is refreshing to see this kind of representation in literature, giving individuals with varying forms of autism a hero with an ability to speak to animals. Agatha does not see any limitations; she only sees what she can do. This leads her to be the hero, to rise on top.

The Good Hawk has a very engaging story. It takes place in mythic Scotland, and the characters are traveling from their home on their own to rescue their clan from invaders. They are going to a new place, encountering different cultures and beliefs on their way. This journey pushes the characters out of their comfort zones and makes them even better as they face a world they never knew existed. Moreover, many fantastical elements keep the reader engaged as well as the introduction of a third narrative that is eerie, creating a sinister atmosphere for the reader. 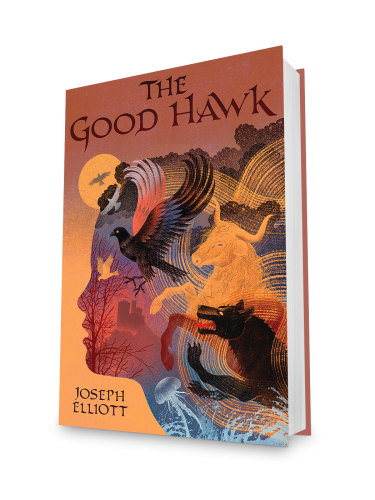