The Ballad of Songbirds and Snakes another incredible Hunger Games novel by Suzanne Collins.

Like many readers, President Snow was not my favorite character. However, despite that, I loved this novel. Collins has done a fantastic job recreating this character for fans of the franchise.

Collins takes readers back to the 10th Annual Hunger Games, which is so different than what readers are familiar with. Instead of previous winners being mentors, a group of Capitol college students are the mentors. This includes Snow, whose family has become destitute since the war. He still lives in the high class, but most of it is a cover, selling what they can and living off broth and leftovers Tigress brings home from her job as an apprentice designer.

This level of detail gives some depth and understanding of the character. It does not excuse Snow’s actions, but it highlights why he became the man he did in the series.

However, this is not a story just about Snow; it is also about Lucy Gray, the tribute from District 12.

No, she is not Katniss. Lucy Gray is a performer by trade and uses it to advantage, to make the audience love her and vouch for her. She dresses in colorful clothing and balances out Snow perfectly. Lucy is the reason for many of the changes made to the hunger games.

Her effect on Snow is instantaneous and if gives an understanding of Snow’s hatred in the series.

Collin’s ability to reference her previous novels was thoughtful and well-constructed. All her easter eggs give the story depth and stable structure. However, they also make the novel fun for the reader. The reader has these moments of nostalgia and it fills the heart with joy to remember such an excellent series.

The Ballad of Songbirds and Snakes is an incredible prequel novel that sets up the perfect stage for the Hunger Games series, giving readers a new outlook on the villainous President Snow and a bit more history of Panem.

A Ballad of Songbirds and Snakes 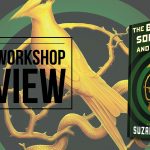