Crown of Coral and Pearl is a thoroughly engaging novel about the bond between sisters.

A Bond Between Sisters

Crown of Coral and Pearl is a novel that focuses on the bond between sisters. However, what does novel also does is evaluates the ridiculousness of judging women by their looks.

The story follows Nor and Zadie, twin sisters from the ocean village of Varenia. In their village, women are valued strictly for their beauty, and for the most beautiful woman, their “gift” is that they get to marry the Crown Prince of the Mainland. It is sexist, but the bond between their characters and the girls’ internal narrative highlights feminism.

The way the story surrounds this idea, that beauty equates to everything and deconstructs this idea put this society on alert. It highlights how detrimental it is to the female bond. Nor’s one scar has put a strain on her relationship with her mother, and the strong bond she has with Zadie puts her at odds with her community because she does not fit into their idea of a “proper woman.”

Nor’s scar creates this barrier between her and her community but not her twin sister, and not her father. It also highlights her devotion to her sister and her resilience.

Overall, Crown of Coral and Pearl is a great story. It delves into this idea of feminism and female unity that makes it a compelling read.

There is also excellent story building going on. Rutherford builds the story up with her mythology and magic. The novel’s fantasy is uniquely connecting strongly to their mythology. It explains why Nor’s people live on the ocean and why they are forbidden from going to the mainland.

The power of the red coral and the pink pearls also gives the story an exciting element. Moreover, of course, there is Ceren, the sadistic prince Nor is bound to marry. There is much tension between them, and it makes the reader wary of who he is. However, his outlook adds new levels of mystery to the story.

Crown of Coral and Pearl is compelling and thoughtful. It is imaginative and gives the reader something worth reading. The tension gives the story an unpredictable edge. There is no way to know how it will end, and when it does, it is jaw-dropping.

Crown of Coral and Pearl 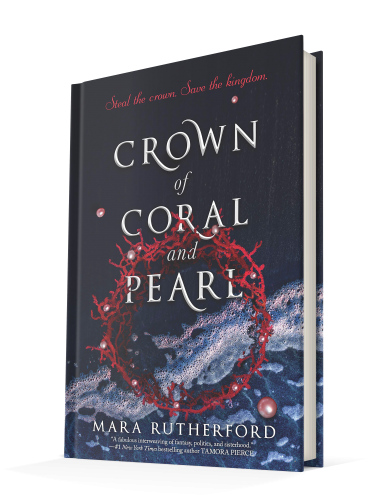