What an excellent novel The Castle School by Alyssa Sheinmel is a remarkable novel about dealing with grief but also dealing with illness both mental and physical. What is exceptional about this novel is the way that Sheinmel addresses disorders and mental illness. She does it in a very thought-provoking, emotional, and empowering way.

The Castle School follows Moira, who is dealing with her grief at the loss of her best friend to cancer. As her only real friend to her, the loss has hit her hard and put a strain on her relationship with her parents, her mother especially. After getting a tattoo, her mother sends her off to boarding school.

The Castle School is a place for troubled teens and Moira has no interest in making new friends. However, what the school and Sheinmel explore thorough this novel is that the school is more than that; it is a haven for those suffering mentally, physically, and emotionally.

Sheinmel highlights the struggle some people go through. What is impactful is how she highlights how people suffering is not just suffering in one way but that the physical, mental, and emotional are intermingled. As readers, we forget that and only see one, but through this lens, Sheinmel gives readers an emotional and insightful read. Sheinmel builds the story and explores whom these girls are without casting shame on the characters. Sheinmel does not make the characters less because they have addictions or harmful addictions; instead, she highlights the struggle these characters go through, making them intense and relatable.

As a story, The Castle School moves at an incredible pace. It is easy to get lost in the story as the reader gets to know who these girls are and how they are suffering. Yes, the story follows Moira as she grows and learns to understand her grief and anger, but Sheinmel breaks up the story, without breaking the pace, but introducing these segments about Moira’s classmates. Sheinmel gives enough information to let the reader understand the characters, strengthening character dynamics.

The Castle School (for Troubled Girls) is a remarkable novel. There is so much depth to the story and it is truly emotional, highlighting the depth of what these girls are going through. Sheinmel addresses illness in all its form in a way that does not shame but instead tells them they are not alone.

The Castle School (for Troubled Girls) 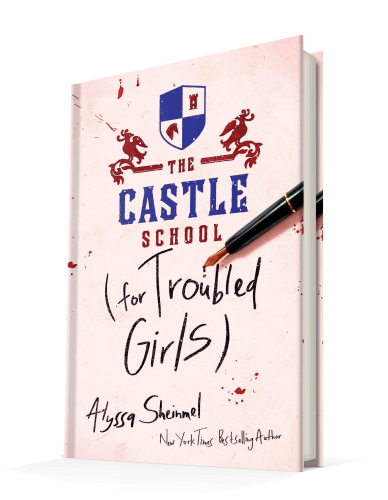