It is always wonderful to pick up a book and be engaged in world-building from the very beginning because it gives the reader a solid foundation to grasp, making It is easier to imagine and see from the details to the intricate politics and culture.

Admittedly, the opening was a bit slow. However, while it might have a slow pace, it focuses on building up those dynamics, the culture, the fantasy, and the politics. Again, this is a very intricate story, but it is written and easy to follow.

Again, the reader sees the influence of Native American culture in the story. There is some argument as to whether or not the author officially belongs to the Ohkay Owingeh Pueblo tribe. However, it says a lot that her memories as a child, her appreciation of her culture, and her husband’s culture, who is Navajo, shines in the novel. When reading, the reader sees Native American individuals portrayed in a way that is not stereotypical.

What also helps Black Sun move forward are the characters. There are three central characters, Sun Priest, Xiala, and Serapio. What makes them attractive is how they are all different and how their fates are tied together.

First off, it is great to see such a diverse cast of characters. However, what makes them more engaging out the level of layers that go into their personalities.

The Sun Priest has to face her trials. Being from the Deep Earth, the Maw, she is considered other and lesser than by the Sky Made people around her. These are people who seek to undermine her, who want her gone because she is different. Despite this, however, she continues to be resilient and deals with morally questionable people to stop a war.

Xiala is Teek which automatically makes her an outsider. As a Teek, she is similar to a siren. Xiala can sing music to the ocean and, in a way, calm the seas. She faces her challenges as a woman with power. Again, she is considered other, but her origins only fuel men to dislike her because she has a power they do not and skills that allow her to rise above them in ranks. Xiala is, by far, one of the more interesting characters in the novel.

Finally, there is Serapio. Blinded as a child by his mother to be a vessel for the Crow God, Serapio is willing to die and kill for his people. He is soft-spoken but intimidating. His narrative goes back on time, building up the present, unlike the others, to give him more depth and create this idea of vengeance versus justice. He was raised to be a vessel, so a part of him is sad that his life was never his own, and it resonates with the reader.

Black Sun is such an incredible novel. As a start to a new series, it gives readers a fresh and inventive new fantasy with complex characters and an intriguing blend of mythology and politics. 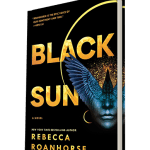 0 thoughts on “Review of ‘Black Sun’”