The Iron Raven follows Puck into the Nevernever in this compelling new start to a series in the Iron Fey realm.

What works so well for The Iron Raven is that you do not have to be familiar with the Iron Fey series to enjoy this novel. Julie Kagawa has done an exceptional job with her storytelling to capture the elements of her previous series without dragging down the storyline.

Right from the beginning, Kagawa gives life and dimension to the world she has built. Again, she is not relying on readers being familiar with her series, which is why this works. This is a book for new readers and fans alike. Kagawa gives the readers enough detail to pull the reader from the start.

The reader is following Puck through the Nevernever, the realm of the Fey that encompasses the Winter Court (Unseelie fey), the Summer Court (the Seelie), the forgotten (a realm for Fey whose names have been lost to time), the Wyldwood, and the Iron Court. And, of course, everything in between. There is so much imagination and magic going on in the storytelling, giving the reader quite the adventure.

Even those scenes that give readers, fans, and new readers alike history or details from the Iron Fey series do not drag down the storytelling. That is the sign of a good writer because sometimes authors lose the story when giving too much history. Here Kawaga does it sporadically at points in the story where it works to maintain the flow and pacing of the story.

The momentum of The Iron Raven never falters, which is fantastic. The pace and rising tension play off each other to keep the story moving forward at an engaging speed.

What is also great about The Iron Raven are the characters. Puck is terrific as the protagonist. He may be a prankster, but there is much depth to his personality. He has had his share of heartbreak, of pain that he has moved on from. However, this monster feeds off negativity and has infected Puck, revering him back to when he was Robin Goodfellow. Puck did not like whom he used to be, and now he has to face that pain again.

The reader sees Puck come face to face with who he was, with the pain and heartbreak he suffered. It is like a fresh wound tearing itself open again and again for Puck. However, the challenge for him is to grow, to move past it again. And he does. It is an incredible moment for him because the reader sees where he was and how far he has come.

What also works so well are those dynamics, new and old. Kagawa is making sure the reader can believe the characters’ relationships.

And Nyx, the moon assassin elf, is the most incredible addition to the cast of characters

The Iron Raven is a compelling new start to a new series. It is sure to please old fans and encourage new readers to grab copies of her Iron Fey series. 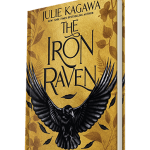 0 thoughts on “Review of ‘The Iron Raven’”