The Infinity Courts takes readers to the afterlife in this riveting story of what is right and wrong and how humanity’s flaws shape the world.

The Infinity Courts follow Nami in the afterlife. After being guilted into buying beer for her senior grad party, Nami dies when the gas station she is at is held up and soon finds herself in an unfamiliar place.

Bowman’s take on the afterlife is unique and compelling. There is no heaven, no hell, just a plane of existence created by human consciousness. It offers readers something new as it follows Nami through this new landscape and her grief of leaving her life behind.

Nami is relatable in that way because she spends her time in the afterlife reflecting on everything she left behind, on everything she will be missing out on, and it tugs at the heartstrings. Her inability to let go, to not forget what was good in her life, is also what makes her human. Nami questions the afterlife, which has been taken over by Ophelia (Alexa equivalent).

Nami questions the AI and the Residents, beings she has created, and realizes that their behavior is learned. The AI’s can only mimic; they cannot create, which is why they enslave the consciousness of humans.

Nami may have been rescued from the Residents, but she does not always see eye to eye with them. Nami looks for peace without (figurative) bloodshed. The Residents are as alive as the people, and she makes a point to say their negative qualities are learned from humans. Nami strives to obtain peace, to reach coexistence, to see if there is common ground. However, with all the pain she has yet to experience, it is not very likely. Nevertheless, she never stops trying, putting her at odds with the rest of the colony.

Bowman address what it means to be human in The Infinity Courts by using Gil and Nami’s perspectives and experiences to create tension. Both see the world differently, but neither is wrong, and that is what makes the novel challenging because they highlight the many shades of grey it takes to make humanity. Gil is the pessimist, a guy who has suffered so much that pain allows him to see only darkness, whereas Nami is the polar opposite. Their different ideas create tension, and the way they challenge each other offers the reader a thoughtful and intelligent debate on life.

The Infinity Courts is a compelling start to a new series. The characters have depth, personality and inspire compassion from the reader. Moreover, the plot itself challenges readers, following the world’s behavior and reflecting on the AI’s mimicry of human consciousness. It puts into question what is humanity and what is right versus wrong. 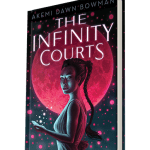 0 thoughts on “Review of ‘The Infinity Courts’”