Three brilliant authors are at it again with their historical fiction, bringing imagination and creativity to My Contrary Mary.

It was such a brilliant move to bring readers back into the Eðian world introduced in My Lady Jane. This was the setting that opened this portal into a new realm of storytelling. So, it was great to see this world brought to life again.

It was also great to see Jane near the end as part of an Eðian refugee organization (H.O.R.S.E.).

Nevertheless, like the previous novel, what makes the novel so brilliant is how the authors break the fourth wall. God, I love the humor in their voices and how they talk to the reader without breaking pace. It works so well because they make you laugh as they reference history and pop culture. Moreover, it does not run the risk of taking the reader out of the story. It pulls the reader deeper into the story.

As with their Jane series, authors Hand, Ashton, and Meadows combine their unique voices to bring to life three distinct characters.

My Contrary Mary splits between Mary Queen of Scots, the dauphin Francis, and Ari de Nostradame, daughter of the famed seer Nostradamus. I do not know how these authors do it, but they can imbue these characters with strong personalities that fit within the historical context. Their personalities also fit within what we as readers know of these characters from historical accounts.

Seeing Mary Queen of Scots rise in France and then go on this adventure to Scotland was brilliant. Her voice was incredible, as was her attitude. The authors made sure to capture this regal self-assured, strong woman, bringing her to life with such ferocity. Furthermore, it was great to see her turn into a mouse as well. Many people do not look at mice much except to rid themselves of them, so it was a clever juxtaposition to her personality.

As for Francis, what was great about him was his character growth. Of course, there is character growth all around but what makes him so remarkable is that he starts insecure, unsure of himself, and the entire experience allows him to grow. Francis grows into this self-assured young man from the man who never felt worthy of Mary. This brilliant team of authors made Francis relatable and grounded, making him worthy of the fierce Mary.

And then there is Ari. As the daughter of Nostradamus, with the same gift of mixing potions and seeing the future, she is trying to prove herself to the royal court. Ari makes many bad decisions, like working for Catherine de Medici, but it mirrors the present-day workforce. Sometimes people think they must sacrifice their morals and ethics to move up, and while that might make her unlikable, it keeps her relatable. The reader wants to see her escape the clutches of Catherine, they want to see her grow, and she does. To see her form an excellent relationship with one of Mary’s ladies and grow into her own person outside of her father’s shadow in a male-dominated era gives her depth.

My Contrary Mary was incredible in every way. The authors rewrite history and use fantasy to highlight those religious prejudices gives the story again this incredible edge. These authors have once again opened the door to a fantastic new series. 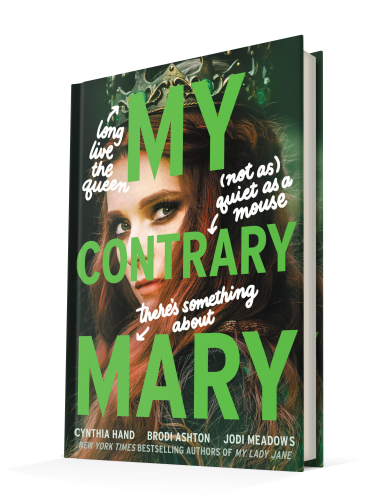