The Diabolic follows Nemesis as she takes Sidonia’s place in the treacherous galactic court.

The Diabolic was reminiscent of a space opera that worked. It takes place in the far-off future, after a deep expiration of space. Society is separated by those who live planetside called Excesses, and then the aristocrats who live in domes in space with artificial gravity and weather.

It is a strong setting and one that works for pulling the reader into the world. It gives it something contemporary to ground the reader in this narrative of social injustice, differences in the class system, and themes such as slavery and indentured servitude.

There are many layers to the storytelling, much more than listed above, and it is interesting to see them developed through Nemesis’s perspective. As a Diabolic, Nemesis’s creation is for one purpose: to be sold to the highest bidder as a tool of protection. She is considered lesser than, and it is not until she ventures from her home to protect Sidonia that she learns that she is more than just a tool.

It is touching to see this character development, to see her memories of her life before Sidonia come forward, empowering her need for justice and equality in a society that sees her as a commodity. Memories of herself trapped in a cage told to kill and fight for food and survival.

As mentioned above, Nemesis’s character development is well done. She goes through great lengths to keep Sidonia safe from the emperor. It is Nemesis who drives the story forward as she tries to navigate the complexities of the court.

However, it is also interesting to see the story unfold in the way that it did. There were bits and pieces of the story that are predictable, especially if the reader is paying attention to the details. They are subtle, but they give the reader an idea of where the story is going.

The rising tension and the subterfuge, the manipulation, and court politics are sharp and precise. They push the reader to the edge of their seat as they seek to find out if Nemesis will live or die. It is such a roll of the dice that it keeps the reader guessing.

The reader wants to root for Nemesis and see all her enemies fall at her feet as she comes into her own. Furthermore, that makes for a compelling read.

The Diabolic is an excellent start to a new series. Following Nemesis’s growth and development, the story brings out some challenging themes while grounding the reader in the sci-fi plot. 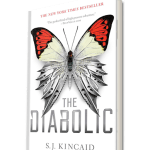 0 thoughts on “Review of ‘The Diabolic’”