A captivating story, The Tiger at Midnight brings together an assassin and a soldier, intertwining their hearts and their mission to save their country.

What drew me to The Tiger at Midnight was the world-building. The fact that Teerdhala draws inspiration from Indian and Hindu mythology gives the story a strong edge. It focuses on the land, on the Gods, on the symbol of blood equating to life.

There are so many illusions to the mythology that make me want to know more about Indian and Hindu mythology. Moreover, it adds layers to the storytelling and reflects on the characters. The novel’s title is referenced in the story, giving a deeper meaning to what the story is about.

The layers to the storytelling give it substance; they add tension to the character dynamics and allow the story to flourish. The Tiger at Midnight evolves as the story goes on, it starts as a story of revenge, but for the characters, they learn more about themselves, learn more about who they are, where they came from, and what drives them at their core.

Alongside the story, these characters evolve. For example, Kunal and Esha begin on opposite sides of a coin but soon realize their core values align.

For Esha, she lives for revenge. Moonlighting as the rebel’s skilled assassin, she is known as the Viper. Esha was a victim of the coup that forced the princess into hiding and took her parents’ lives. Esha was a child when the pretender king took the throne. Her latest assignment brings her path across Kunal, a loyal soldier who longs to join the outside world.

They get wrapped up in their lies and secrets, but also their desire to make their kingdom a better place. Their dynamics reflect their characterization and their growth. Esha encourages Kunal to ask questions and expand his perception. On his journey to hunt down the Viper, he sees how the people are being abused by power, neglected by an army that is supposed to protect them.

Kunal is a soldier but an honest one. He only wants to see his people cared for, protected, not abused or neglected. Moreover, it is great to see him grow and learn.

The same goes for Esha. She sees more than Kunal, but her sight is clouded by revenge and anger. Kunal opens her eyes to hope. Kunal opens her eyes to the possibilities; he allows her to open herself up. Esha’s biggest flaw is her inability to let people in. Esha lives in suspicion, with doubt surrounding her and to see her break out of her shell is an excellent moment for storytelling and characterization.

The Tiger at Midnight is an excellent novel because it evolves. The story and mythology interweave with one another and build a strong narrative to hook the reader. However, what is more, impressive is how it evolves steadily, focusing on characterization and character growth.

The Tiger at Midnight 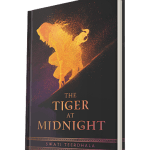