The Archer at Dawn raises the stakes and tension that began in Tiger at Midnight, focusing on the relationship between Esha and Kunal and the kingdom’s fate.

Teerdhala did a fantastic job raising the tension between the characters as they continue to grow and evolve the plotline. Kunal and Esha infiltrate the pretender king’s court for the Sun Mela, a celebration for peace and deadly competition. For both characters, this means coming to terms with their past and how it affects their future.

Kunal discovers more about himself and where his alliances lie, especially after returning to the soldiers as a spy for the rebels. Kunal is an honorable character. He hates lies, hates lying, and sees that the soldiers around him are not all evil. However, in the nobility, he sees the rot in the kingdom in the king himself and wants to end it.

However, another sect of rebels has also begun to make a name for themselves, putting Kunal’s love for Esha in danger.

For Eshe, returning to the place her innocence was taken is hard. As one of the rebels’ leaders, her decisions to take revenge put her at odds with the rebels and Kunal. Esha is returning to her nature of keeping secrets. She may have grown since meeting Kunal, but the darkness, anger, and blind rage that need revenge continue to have a pull on her, building up that wall that was cracking in the previous novel.

The development of their ethics, of their morals, continues to shape these characters and their relationships with one another. It keeps them exciting and makes them worth reading about. They are flawed and relatable, making the romance between them even more captivating because the reader understands where they are coming from.

What also works well for The Archer at Dawn is the evolution of the story. A lot is happening between Esha’s need for revenge, Kunal’s past coming alive, the Sun Mela, and the return of princess Reha, but it is all easy to follow. Moreover, while the story goes in many different directions, they all pull and knot together cohesively.

Teerdhala once again masters the way they layer their story together. Their ability to weave together a cohesive story works well for the narrative. There is intrigue; there is emotion wrapped up in the rising tension and pacing. However, Teerdhala also manages to slow down the story at pivotal moments to reflect on the characters, to build up the scene slowly and steadily that grips the reader.

An excellent sequel full of fantastic plot twists and turns, The Archer at Dawn keeps up the momentum from its predecessor. It continues to evolve the story in an incredible unforeseen way.

The Archer at Dawn 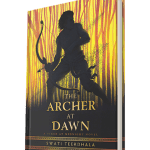