The Jade Bones picks up where The Seventh Sun leaves off and makes this series worthwhile as it expands on the narrative and encourages character growth.

One of the aspects that sets The Jade Bones apart from its predecessor is the way the story develops. Forbes decided to split the narrative between three perspectives, and it worked better than the previous novel.

In The Seventh Sun, Mayana was not wholly relatable. At times she read as a two-dimensional know-it-all because her internal tone did not carry the tension well enough.

Forbes has improved on that. Mayana still likes to act like a know-it-all, but there is a ferocity behind her personality that was not present in the previous novel. Her tone and the challenges, the questions she forces herself to ask, make her relatable, flawed even. Furthermore, there seems to be more growth on her part. Mayana grows through the tension between her and Ahkin, and the underworld trials push the character to her limits making her face her darkest fears.

However, the story is no longer just about Mayana. Again, the story shifts between perspectives and gives Prince Ahkin and Yemenia their time to shine.

Yemenia is a character with minimal self-esteem because her family is abusive. She was not clever enough, thin enough, or athletic enough. So Yemenia was ready to be a sacrifice in the previous novel. However, her journey in this novel is incredible. Yemenia discovers her true worth, promoting the theme of body positivity.

To see her go from meek to fierce is incredible. Yemenia’s whole journey uses her intelligence and ability to heal to wrong the rights of the previous novel. It is just incredible to see her blossom, to see her defend herself, to see her challenge those who would harm her. She no longer cast her eyes to the ground, but now, Yemenia holds her chin up with strength and confidence in her eyes, and it is incredible to see.

For Ahkin, he was a prince betrayed by his twin sister so that she could live the life she has always wanted, a life of freedom. As a result, Ahkin has problems trusting, and his whole world has been turned upside down. This forces him to reconcile that he was wrong and that everything he knew was a lie.

Ahkin is learning that he does not have to do everything by himself. He learns to trust in others and to trust in Mayana.

The story also allows the reader to understand the villains of the plot. Are they right? No, but their actions are understandable, creating compelling tension in the plot.

The Jade Bones splits between characters and between the underworld and the overworld (land of the living).

There is also the fact that Mayana and Ahkin’s journey is reminiscent of Dante’s Inferno. They are traveling through the underworld layers to help the mother goddess and find their way back home. They are faced with their darkest fears, pushed to their limits, and honestly, it was brilliant to see the layers of the underworld brought to life.

The Jade Bones is a rush. With a brilliant combination of storytelling and character growth, this is a sequel worthy of reading. 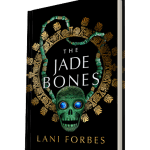