Sword of Destiny gives readers new tales of the Witcher Geralt with twists on classics and new unique adventures of fantasy and magic.

Sapkowski is a fantastic writer. Why? Because he was a way with words, storytelling, drawing the reader into the story and giving them something.

In Sword of Destiny, there are six short stories, each one as different as the one before it, and yet, the way they move into one another makes sense. These stories do not seem random. Instead, each one has a message that drives the story forward, keeping up the story’s momentum.

These stories are also so fulfilling. I usually do not read compilations because I am often left unfulfilled by them. However, with Sword of Destiny, I devour them, and I am satisfied by the ending. Geralt grows; each story has plot development and character development to hold the reader in the narrative. Two stories draw illusions to The Snow Queen and The Little Mermaid. I loved that; I loved how Sapkowski could draw from those tales to create something else entirely.

Sapkowski does not retell fairy tales; he reinvents them.

Each tale in Sword of Destiny also sees growth in the characters. Geralt is a Witcher, which means he is met with many prejudices against those who are different. He has Yennefer and Dandelion, two characters who see him as more than an abomination, but they rarely do. However, of course, each story does have Geralt come across someone new who is respectful of him.

These characters challenge him; they have ethical and moral debates that add to the growth of the narrative and the character Geralt.

There is a change in Geralt as a person by the final tale, and it happens subtly over time. However, it also seems more like his deeper self is coming to the surface, that he is allowing himself to be more human, rather than apart from them.

The reader also sees more of his relationship with Ciri, Yennefer, and Dandelion develop. These three characters are more present in these stories than in The Last Wish, adding to the depth of his relationship with them. The reader sees and understands what these characters mean to one another and the depth of love between them. They are lovely and funny all at once, especially where Dandelion and Ciri are concerned, offering up something delightful.

Sword of Destiny is a fantastic collection of stories. There is depth and humor to them, and for fans of Netflix’s Witcher series, this is a must-read. 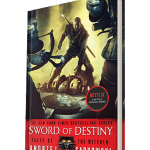 2 thoughts on “Review of ‘Sword of Destiny’”